Stephen Kinzer is a senior fellow at the Watson Institute for International and Public Affairs at Brown University, and author of the forthcoming book “The True Flag: Theodore Roosevelt, Mark Twain, and the Birth of American Empire.” Follow him on Twitter @stephenkinzer. 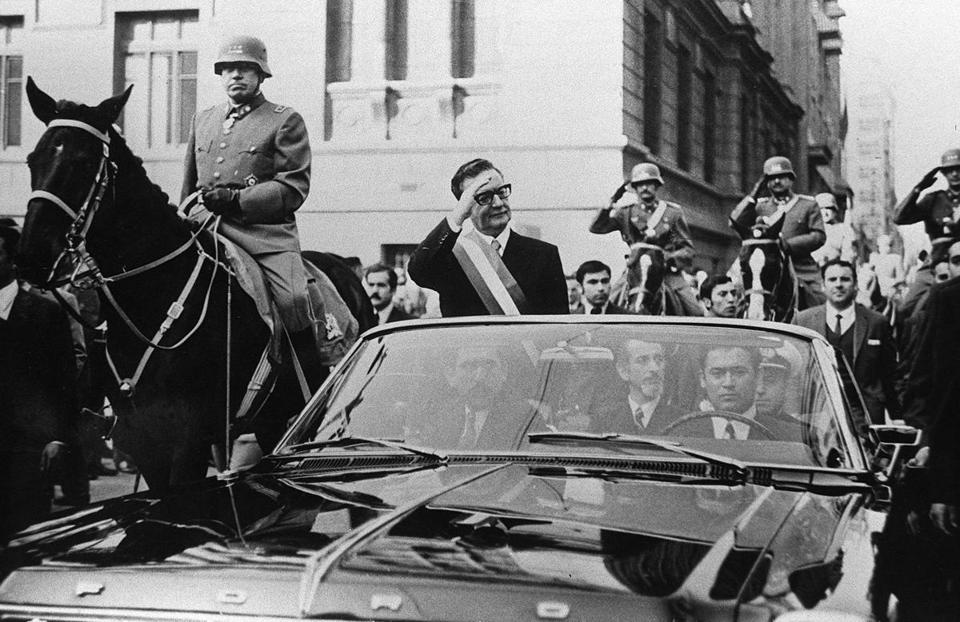 Chilean President Salvador Allende waved to supporters in Santiago a few days after his election in 1970. The car was escorted by General Augusto Pinochet.

Outrage is shaking Washington as members of Congress compete to demonize Russia for its alleged interference in America’s recent presidential election. "

One of our first operations to shape the outcome of a foreign election came in Cuba. After the United States helped Cuban rebels overthrow Spanish rule in 1898, we organized a presidential election, recruited a pro-American candidate, and forbade others to run against him. Two years later, after the United States annexed Hawaii, we established an electoral system that denied suffrage to most native Hawaiians, assuring that only pro-American candidates would be elected to public office.

During the Cold War, influencing foreign elections was a top priority for the CIA. One of its first major operations was aimed at assuring that a party we favored won the 1948 election in Italy. This was a multipronged effort that included projects like encouraging Italian-Americans to write letters to their relatives warning that American aid to Italy would end if the wrong party won. Encouraged by its success in Italy, the CIA quickly moved to other countries.

In 1953, the United States found a former Vietnamese official who had lived at Catholic seminaries in the United States, and maneuvered him into the presidency of newly formed South Vietnam. He was supposed to stay on the job for two years until national elections could be held, but when it became clear that he would lose, he canceled the election. "I think we should support him on this,” the US secretary of state said. The CIA then stage-managed a plebiscite on our man’s rule. Campaigning against him was forbidden. A reported 98.2 percent of voters endorsed his rule. The American ambassador called this plebiscite a "resounding success.”

In 1955 the CIA gave $1 million to a pro-American party in Indonesia. Two years later the United States maneuvered a friendly politician into the presidency of Lebanon by financing his supporters’ campaigns for Parliament. "Throughout the elections, I traveled regularly to the presidential palace with a briefcase full of Lebanese pounds,” a CIA officer later wrote. "The president insisted that he handle each transaction by himself.”

Our intervention in Lebanon’s election provoked protests by those who believed that Lebanese voters alone should shape their country’s future. The United States sent troops to Lebanon to suppress that outburst of nationalism. Much the same happened in the Dominican Republic, which we invaded in 1965 after voters chose a president we deemed unacceptable. Our intervention in Chile’s 1964 election was more discreet, carried out by covertly financing favored candidates and paying newspapers and radio stations to skew reporting in ways that would favor them.

The next Chilean election, in 1970, drew the United States into one of its furthest-reaching interventions. The CIA and other government agencies used a variety of pressures to prevent the Chilean Congress from confirming the victory of a Socialist presidential candidate. This operation included shipping weapons to conspirators who, several hours after receiving them, assassinated the commander of the Chilean military, who had refused to lead a revolt against democracy. His murder did not prevent the accession of the candidate we detested, but the United States relentlessly punished Chile for the next three years until the military staged a coup and ended democratic rule. An American official asserted that intervention in Chile was made necessary by "the stupidity of its own people,” which they expressed by voting for a candidate we opposed.

Among many CIA operations to influence elections in the Middle East, one in 1975 helped elect a prime minister of Israel whose policies the United States favored. In Central America, intervening in elections is an even older habit. The CIA recruited a pro-American economist to run for president of Nicaragua in 1984, and when it became clear that he would lose, pulled him out of the race amid laments about the lack of electoral freedom in Nicaragua. In 2009, the United States encouraged a military coup in which the elected president of Honduras was deposed, and then endorsed a new election in which he was not allowed to run.

Perhaps the most recent US intervention in foreign politics came in Ukraine. In 2014, as protesters gathered there in an effort to overthrow their elected government, a senior State Department official appeared in the crowd to encourage their revolt. She was caught telling an aide which Ukrainian politician was "the guy” Americans had chosen to be Ukraine’s next leader, and asserting that the United States would "midwife this thing.” A few weeks later our "guy” became prime minister — setting off a crisis that ended with Russian military intervention.

Condemning interference in foreign elections is eminently reasonable. The disingenuous howls of anti-Russian rage now echoing through Washington, however, ignore much history.