Richard Sakwa is professor of Russian and European politics at the University of Kent. His latest book is Frontline Ukraine: Crisis in the Borderlands 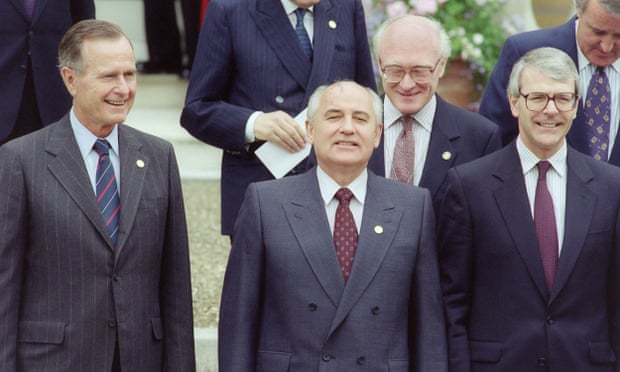 George Bush, Mikhail Gorbachev and John Major at a 1991 G7 summit. Gorbachev believed ‘the end of the cold war represented a moment when Moscow could work with the western powers to create a new political community as equal founding members’. Photograph: Eric Feferberg/AFP/Getty Images

As the cold war ended, Mikhail Gorbachev wanted a new political community, with Russia as an equal partner. The west refused to countenance it

Long before Vladimir Putin came to power in 2000, the stage was set for Russia’s current confrontation with the west by the failure to achieve a transformed and inclusive peace order after the collapse of the Soviet Union.

Two incompatible narratives came into conflict after the Eastern Bloc began to crumble in 1989. For the west, nothing needed to change. The Atlantic community had effectively won the cold war, demonstrating the superiority of the western order, and thus all that was required was for Russia to join the expanded western community. The door was indeed opened, but the terms were not right. Boris Yeltsin made this clear, in an incoherent and contradictory manner. Putin ultimately made the same point, rather more forcefully. The west invited Russia to join an expanded Atlantic community, but Russia sought to join a transformed west and a reconfigured Europe, goals that remain active to this day.

For Mikhail Gorbachev, the last Soviet leader, the end of the cold war represented a moment when Moscow could work with the western powers to create a new political community as equal founding members. The historical west, with Nato and the European Union at its core, would, in the Russian idea, become a greater west, with Russia a founding member of a new political community. This was accompanied by various Gaullist ideas to establish some sort of pan-continental greater Europe, stretching from Lisbon to Vladivostok.

But the Atlantic powers, fearing that Russia was trying to drive a wedge between its two wings in Europe and America, rejected these ideas. In practice, Russian and western views were not so far apart. What was required was some sort of reconciliatory framework, and it is this intangible but essential ingredient that has been missing in the post-cold war years.

Instead, the end of the cold war reinforced one side at the expense of the other, and without a transformation of world order. This means that in structural terms the cold war never really ended. Russia could have become part of the winning constellation, as Germany and Japan did after 1945, but that would have required some sort of admission of defeat, and that is something that no Russian leader, certainly not Yeltsin nor Putin, were ready to concede. Instead, the institutions and ideas triumphant at the end of the cold war enlarged, driving Russia into a strategic impasse.

A difference of intellectual emphasis became a political division, and the gulf between expansion and transformation defines the confrontation today. The existing order was simply enlarged, and thereby radicalised, rather than transformed. Instead of transcending the logic of conflict in Europe and in global affairs, it was perpetuated in new forms. In the end, Russia reacted by adopting a policy of resistance to what was considered a liberal political order that asserted its values not as an autonomous good, but as part of the enlarging power system itself.

Without the Soviet Union to act as a constraining force, the world order established after 1989 turned out to be effectively unipolar, with all of the dangers that attend such a situation. Neither Russia nor China is in a position, nor do they desire, to balance against the dominance of the American-led power system. What they do want is a more pluralist international order, rather than a single dominant power system. They wish to see the institutions of international society, notably the UN, the WTO and international financial institutions, work autonomously and impartially. Russian politicians repeatedly talk of the need to establish a more multipolar system.

The gap between the proclaimed values of the Atlantic order and its practical manifestations can also be formulated as the gulf between principles and practices (the problem of "double standards”). This provoked Russia’s critique of western practices in defence of its proclaimed principles. Just as Russia has long positioned itself as the defender of the "true Europe” against the alleged degenerate actual version, Russia today claims to be the chief exponent of genuine European values that it asserts the west as a whole has lost. Naturally, this presumptuous claim is rejected by the west. But for Russia, the assertion of some sort of distinctive values is broader than a return to obscurantist conservatism and part of the larger reassertion of cultural and civilisational pluralism and diversity. The values challenge is also a challenge to the power system established at the end of the cold war.

The attempt to change not just the balance of power between the hegemonic ambitions of different world orders, but to change the nature of hegemony itself was not achieved. Instead, Russia was subjected to various forms of "soft containment”, which has hardened over time. The crisis over Ukraine in 2014 was a symptom and not the cause of the breakdown in European security.

But the larger process of post-cold war adjustment and the emergence of an anti-hegemonic alignment of Russia, China and some other powers can hardly be called a new cold war. The original cold war was a regional confrontation with global implications, while the present seismic shift is a global process with regional implications. The anti-hegemonic powers now amplify Russia’s original demand at the end of the cold war in 1989: for a transformation of global politics based on a pan-continental peace order in Europe and a more pluralistic (and just) international system.