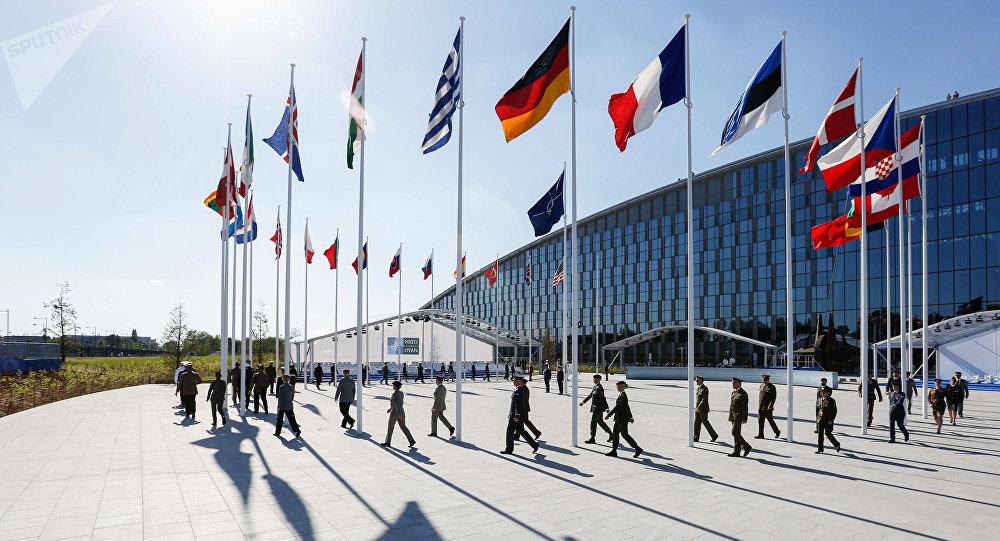 A meeting of the NATO-Russia Council (NRC) at the ambassadorial level convenes at the Alliance's headquarters in Brussels on Thursday.

MOSCOW (Sputnik) — The NRC was established at the Russia-NATO Summit in Rome on May 28, 2002 by the Declaration on NATO-Russia Relations: a New Quality. The NRC replaced the Permanent Joint Council (PJC), a forum for consultation and cooperation created by the 1997 Russia-NATO Founding Act on Mutual Relations, Cooperation and Security, which remains the formal basis for Russia-NATO relations.

The NRC serves as the principal structure and platform for advancing the relationship between Russia and NATO. Under the Council, Russia and NATO member states meet as equals "at 29," rather than in the bilateral "NATO+1" format under the PJC.

Under the Rome Declaration, Russia and NATO member states will work in the Russia-NATO Council as equal partners in areas of common interest. The Russia-NATO Council will provide a mechanism for consultation, consensus-building, cooperation, joint decision, and joint action for NATO member states and Russia on a wide spectrum of security issues in the Euro-Atlantic region.

Furthermore, the Declaration stipulates that NRC members, acting in their national capacities and in a manner consistent with their respective collective commitments and obligations, will take joint decisions and bear equal responsibility, individually and jointly, for their implementation.

Work in the NRC has been focused on the areas that were outlined in the Founding Act, and include the struggle against terrorism, crisis management, non-proliferation, arms control and confidence-building measures, theater missile defense, search and rescue at sea, military-to-military cooperation, defense reform and civil emergencies.

The NRC members will continue their work to identify and develop potential key areas of cooperation, and has already established over 25 working groups and committees to that end.

Until 2014, NRC meetings at the level of ambassadors and military representatives were held at least once a month and were chaired by the NATO secretary general. Twice a year, the NRC met at the level of foreign and defense ministers and chiefs of general staff, while also trying to met at the level of heads of state and government whenever possible.

The Preparatory Committee met twice monthly, or more often if necessary, to consider issues for subsequent discussions at the ambassadorial level and to monitor the operation of experts under the NRC.

The NRC has accumulated positive experience in joint actions against the common threats, such as terrorism, piracy, natural disasters and industrial accidents, as well as Afghanistan. At the same time, their views differ significantly on fundamental issues of national security, in particular, the US ballistic missile defense plans for Europe.

In March 2014, Russia-NATO relations soured over Crimea’s integration into Russia. Then NATO Secretary General Anders Fogh Rasmussen said at a news conference on March 5 that they "have put the entire range of NATO-Russia cooperation under review." He added that ambassadorial meetings in the NRC would be maintained.

On April 1, 2014, NATO suspended all practical and military cooperation with Russia. However, it decided to keep channels of communication open in the NRC at the ambassadorial level and above.

In 2016, the NRC met for the first time in nearly two years at NATO’s initiative. The meetings were held at the ambassadorial level in Brussels on April 20, July 13 and December 19 to discuss the crisis in Ukraine, security issues in Afghanistan, and risks related to the NATO military build-up on Russia’s western border.

The first 2017 meeting of the NRC took place on March 30, during which the sides discussed terrorism and crises in Afghanistan and Ukraine as well as reciprocal transparency and risk reduction in the Euro-Atlantic area.

Top
popular in the journal
RUSSIA AND COVID. Latest numbers: total cases 1046K; total deaths 18,263; tests per 1 million 270K. Russia has done 39.5 million tests (fourth after China, USA ...
WASHINGTON, August 24. /TASS/. US Deputy Secretary of State Stephen Biegun will visit Russia, Lithuania and Ukraine on August 24-27, the US State Department’s press ...
International news is abuzz over the poisoning of yet another Putin critic. This time the victim is Alexei Navalny. He's been a de facto leader of activities in ...
Contrary to the belief that Putin is an unstoppable tyrant, something may be up. Is it a palace coup in the making? Or is it an improbable string of blunders?
As the world order evolves, there should be an opportunity for countries to build new relationships. But as long as Western powers follow the tired US narrative that ...