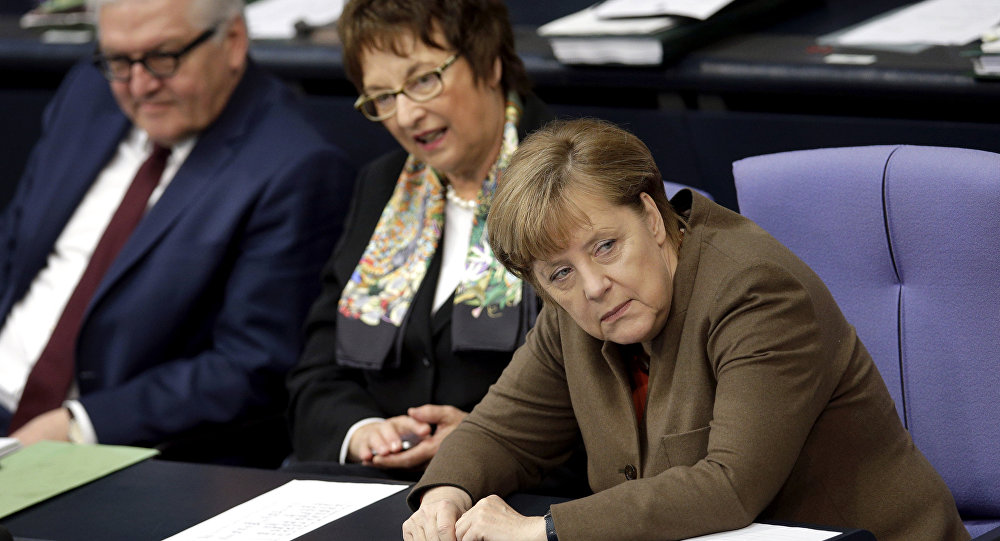 In the latest signal of a potential trade war between the US and Europe, German Economy Minister Brigitte Zypries has once again lashed out at the US anti-Russian sanctions program, stating it violates international law and punishes European firms, and called on the European Union to consider countermeasures against Washington.

Speaking to local media, Zypries said the US could not punish German firms on the mere basis they were doing business with — or in — another country.

While she stressed a trade war between the two Western giants was an unwelcome prospect, she made clear Europe remains ever-ready to take "retaliatory measures" in response to US intransigence.

"We consider this as being against international law, plain and simple. The Americans can't punish German companies because they have business interests in another country, but unfortunately that is exactly what they are doing. That means that it is right that the European Commission now considers countermeasures," she said.

The latest sanctions bill will fine businesses found to be helping Moscow expand and enhance its energy export pipelines, theoretically leaving European energy firms open to harsh penalties purely for having ties to Russian firms. While President Donald Trump is yet to give his assent, former White House Communications Director Anthony Scaramucci said July 27 Trump is certain to either sign the bill or negotiate an "even tougher deal" against Russia.

Of particular concern to Zypries is Nord Stream 2, a pipeline project aimed at pumping Russian natural gas to Europe via the Baltic Sea to landfall in Germany. The project is being spearheaded by Gazprom, and supported by a number of European partners including Germany's Wintershall and Austria's OMV.

As of August 1, Brussels is yet to comment on the sanctions bill, or its bearing on European energy firms, although member state leaders themselves haven't been silent.

If a trade war were to erupt, it would not be without precedent — the "banana wars" raged for much of the 1990s. Then, it was the US that bore a grievance, over an EU scheme that gave banana producers from former European colonies in the Caribbean special access to European markets.

Believing the deal broke free trade rules, the US filed a complaint against the EU with the World Trade Organization (WTO) and won in 1997, forcing the EU to alter its rules.

Despite the ruling, the US felt free trade in bananas had not been restored, and imposed retaliatory 100 percent import duties on European products, ranging from Scottish cashmere to French cheese. As a result, Europe's exporters were obliged to pay huge amounts to US customs simply to get their products onto the US mainland, threatening EU exports worth around US$520 million annually, and placed thousands of jobs at risk.

Moreover, almost concurrently, in 1996 the US similarly sued Brussels at the WTO over the latter's ban on hormone-treated beef. Europe upheld the ban, so the WTO authorized the US to impose punitive tariffs equal to the damage suffered because of the hormone ban.

The retaliatory tariffs had a massive impact, causing the value of EU imports affected by the duties to drop from US$130 million in 1997-98 to under US$15 million in 2008.

The dispute persists to this day, with Trump mulling 100 percent tariffs on around 90 European products, particularly agricultural products from France, Germany and Italy. However, US cross hairs are also bizarrely trained on mopeds, chocolate, mustard, paprika, chestnuts and even hair clippers.

In July, European affairs analyst Yannis Koutsomitis warned if a new trade war were to ignite, "everyone would lose."

"Europe is dependent on Russia in this regard, and will be for many years. If there is a disruption in cooperation between the two in the sector, it will have a huge impact on energy prices in the EU. We're facing a very delicate situation right now. We should find ways to bridge differences, rather than putting new obstacles in the way of reconciliation. The US will suffer from these sanctions as well," Mr. Koutsomitis previously told Sputnik.