At the plenary session of the Eastern Economic Forum in Vladivostok last week, Russian President Vladimir Putin expressed confidence that there would not be another large-scale military conflict on the Korean peninsula. Russian political observer Anatoly Wasserman explains what it is that the Russian president knows that many observers don't.

Addressing participants of the forum on Thursday, Putin said he believed all the parties involved in the standoff in the Korean peninsula are likely to "have enough common sense and understanding that they bear responsibility to the people in the region, and [that] we could solve this problem by diplomatic means."

"Like my South Korean counterpart, I am sure that there will not be a large-scale conflict, especially one involving the use of weapons of mass destruction," the Russian leader added.

Putin also recalled that in 2005, the parties to the conflict were on the verge of reaching an agreement on Pyongyang's nuclear program. "Agreements were reached under which North Korea assumed responsibility to curtail its nuclear and missile programs. All other parties in this process promised to contribute to this. But then, someone started demanding from North Korea what it did not promise, and gradually the situation deteriorated to the present state," he said.

Analyzing the Russian president's remarks in an article for RIA Novosti, Anatoly Wasserman took note of the fact that "first of all, Putin diplomatically avoided naming this 'someone'. It's like in the famous anecdote about a group of woodland critters including a fox sitting down in the woods to play cards, one of them saying 'if someone cheats, they'll get a slap in the face –their sneaky orange face.'"

"In the conflict we're discussing here, it's equally obvious just who it was that may have demanded from North Korea something that Pyongyang never promised," the political observer wrote.

"Factually," Wasserman suggested, "among all the potential parties in the conflict on the Korean peninsula, only one is known for its inadequacy. Specifically, it was the same one that the Russian president was referring to a few days earlier at a press conference following the BRICS summit, when he said that these were the people who would confuse Austria with Australia."

In the case of the Koreas, the observer suggested that both of them are rational enough, "if only because the conflict that's developing today is just another stage of a confrontation that's been going on in the peninsula since the beginning of the 20th century, when Korea was first occupied and thoroughly genocided by Japan. Then, after Japan was expelled, there were those who sought to turn the territory…into their own strategic base, and who would use this base for another genocide of Korea."

Background note: During the Korean War of 1950-1953, the US Air Force dropped 635,000 tons of bombs, nearly 150,000 tons more than it had in the entire the Pacific Theater during World War II, on Korea. The Korean War caused over 3 million civilian casualties, the vast majority of them in the north.

© AFP 2017/ KIM DOO-HO
A South Korean JSA guard (front R) and North Korean guard (L) stand guard opposite each other at the border of the truce village of Panmunjom in the Demilitarized zone (DMZ) dividing the two Koreas. File photo.

"So far as I understand it, both Koreas remember the genocides that were arranged for them perfectly well, and do not have the slightest desire to allow anyone to repeat them," Wasserman wrote. Therefore, he added, "I am quite certain that among all the participants of the conflict in the Korean peninsula, only the US is capable of behaving inadequately and aggressively."

"Given these circumstances, I believe that the behavior of the South Korean president, which consists of a harmonious combination of a reminder of the danger posed by North Korea's conduct, and promises to offer Pyongyang a role in mutually beneficial economic projects, is the most reasonable way forward," the observer noted.

"Because on the one hand, participation in such projects significantly weakens interest in any aggressive behavior, even though it does not completely eliminate it…And on the other hand, extensive global experience shows that when a country has great economic potential, it often also has the opportunity to build up its defense potential quickly and, therefore, does not have to do so in advance and spend a great deal of money doing so…For this reason, countries that are economically developed, as a rule, appear less aggressive."

With these facts in mind, Wasserman noted that the strict pro-diplomacy position "expressed by the South Korean and Russian presidents at the Eastern Economic Forum is the most promising way to resolve the conflict." 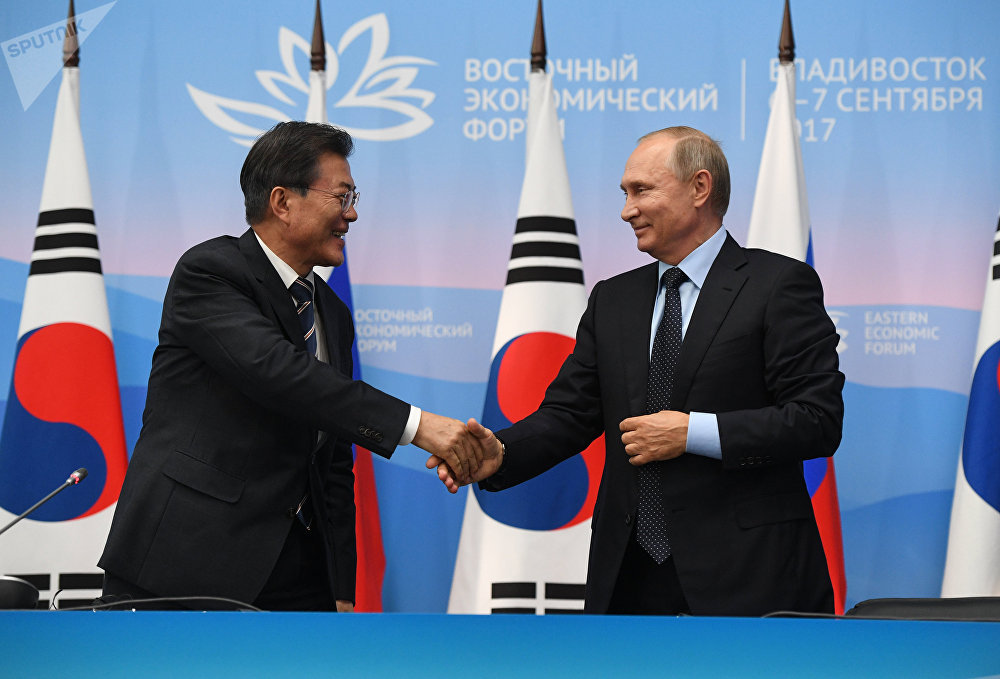 © SPUTNIK/ GRIGORIY SISOEV
Russian President Vladimir Putin and President of South Korea Moon Jae-in, left, during a joint press statement on the results of the meeting held as part of the 3rd Eastern Economic Forum at the Far Eastern Federal University, Russky Island. September 6, 2017
The analyst recalled that in the early period of the dispute over North Korea's nuclear ambitions, "the United States promised Pyongyang that it would help it resolve a number of serious energy problems by supplying it with sufficient energy resources at world energy prices, and create in the country a powerful nuclear energy complex using American technology which would guarantee the inability to use this complex for military purposes."

"Pyongyang readily agreed to these proposals," Wasserman wrote. "But after that, Washington, quibbling over some small issue, refused to fulfill their own promise. And thus North Korea was forced to develop its own nuclear energy, giving it the opportunity to continue its project to create nuclear weapons. So the US did not simply demand from North Korea something that Pyongyang did not promise, but also violated their own promises, and in a way that obviously led to an aggravation of the situation."

Ultimately, Wasserman wrote that he could not exclude that the US may have sought to deliberately aggravate the situation in the region, "because without this they would risk losing the political reason for the deployment of US troops in the Korean peninsula." 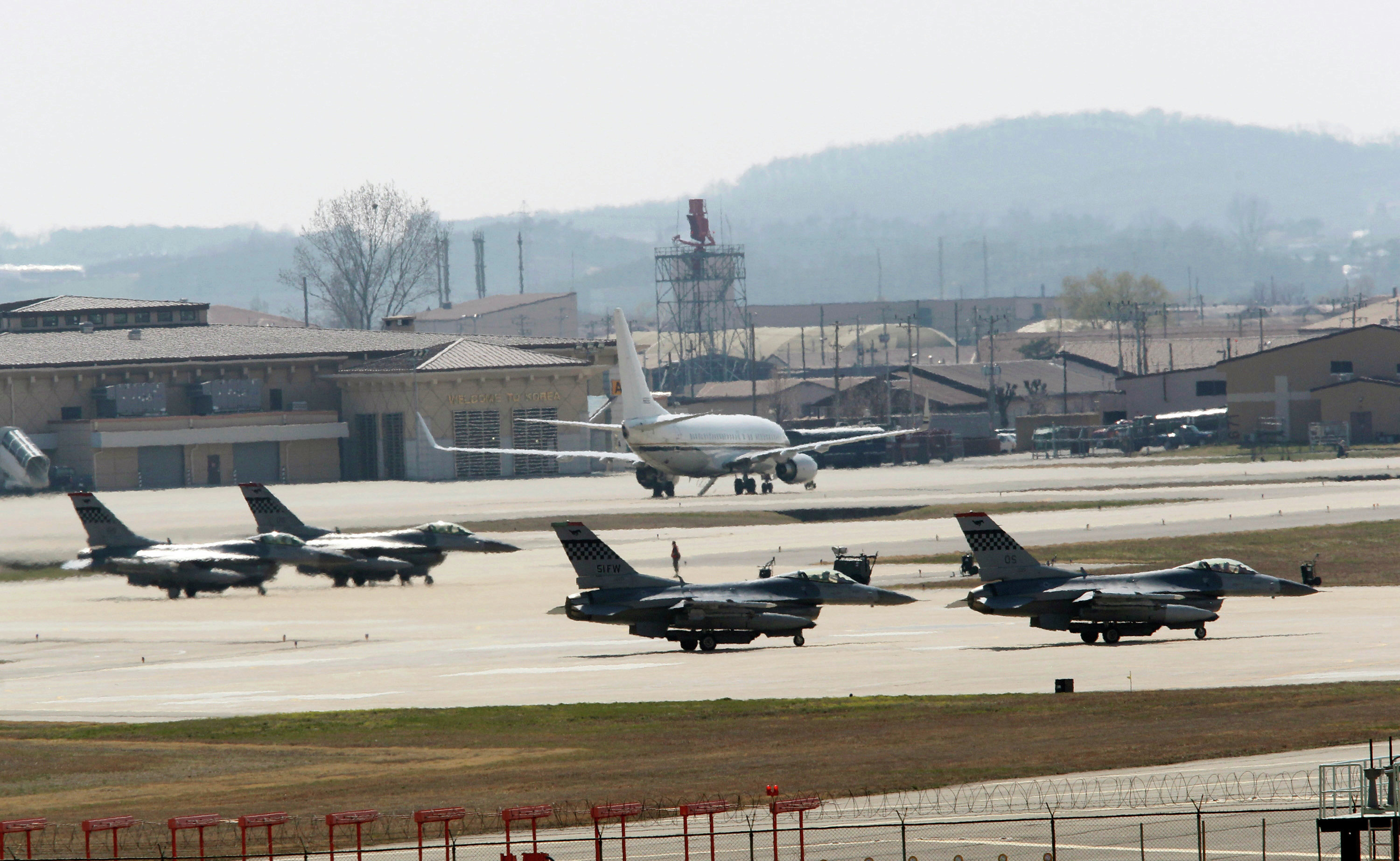 © AP PHOTO/ AHN YOUNG-JOON
U.S. Air Force F-16 fighter jets wait to take off from a runway during a military exercise at the Osan U.S. Air Base in Osan, South Korea

"Is there anyone now who's interested in war?" the commentator asked. "I think not," he answered. "Theoretically, one can imagine that for a part of the American establishment, this war could be deemed profitable under the present circumstances, since President Trump won the election thanks to his promise to return jobs to the country. And jobs began leaving the US for South Korea long before than they started to leave for China. Therefore, I cannot rule out the possibility that the destruction of South Korea as a result of a war would be beneficial to the US," or at least to those financial and industrial groups who may look to rebuild the US industrial base at any cost.

"But even in the US, those forces for which a war in Korea would be unprofitable are even stronger. And the Russian president, I think, is also aware of this," Wasserman concluded.