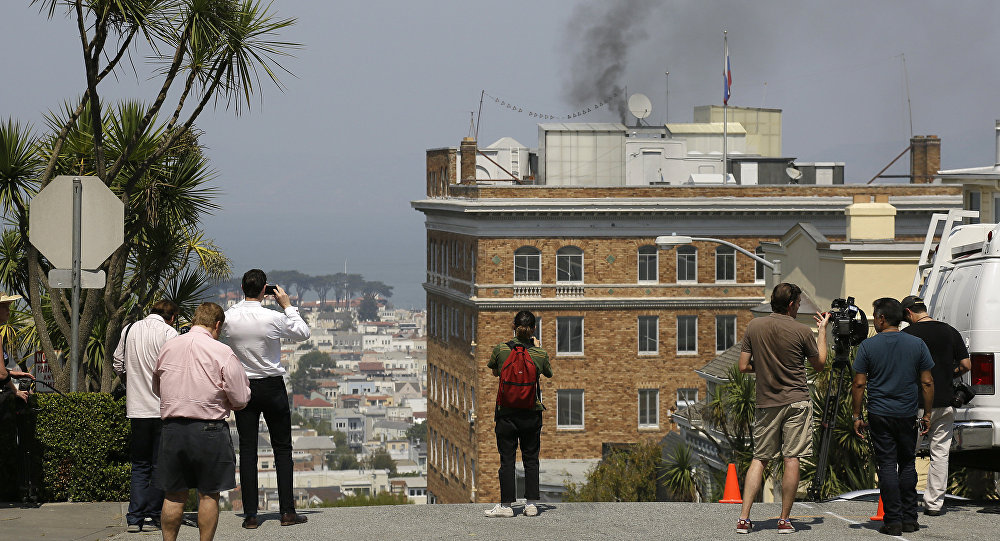 The Russian Deputy Foreign Minister spoke about the prospects of the US returning seized Russian diplomatic property and Russia's response to the controversial move following talks with a US State Department high-ranking official more than a week after the US law enforcement conducted searches inside the diplomatic facilities.

HELSINKI (Sputnik) — Moscow is planning to strip US diplomats of some "additional bonuses" they enjoyed while working in Russia, but means just to even the working conditions of the US and Russian diplomats in both countries rather than to further escalate the situation, Russian Deputy Foreign Minister Sergey Ryabkov said on Tuesday.

"It is rather normalizing the situation in terms of the US diplomats losing some additional bonuses or some preferences they enjoyed for some time. But after their harsh steps, harsh measures against our overseas missions it became impossible to maintain such a situation," Ryabkov told reporters.

He added that he had explained the situation to US Under Secretary of State for Political Affairs Thomas Shannon during their meeting in the Finland’s capital of Helsinki earlier in the day.

"We do not wish to turn this into a reason for another outbreak of emotions and arguments," Ryabkov stressed.

When commenting on the issue of seized Russian property, Ryabkov said that Moscow regrets the lack of prospects of Washington returning Russian diplomatic buildings seized on US soil.

"Unfortunately, I do not see any prospects of settling the problem with the return of the diplomatic property to us," Ryabkov said.

Russia could file a lawsuit against the United States over seizure of its diplomatic property within the coming weeks, he said, commenting on the decision made by Russian President Vladimir Putin last week.

"We will try to literally make it in hot pursuit. But there is no specific schedule of action yet. Generally speaking, we are still on a starting point in terms of choosing the arguments and analyzing which way we should better move, but we will not delay this process in any way," Ryabkov said.

The Russian diplomat stressed that despite having tensions, Moscow and Washington should not slow down the pace of contacts as there is room for progress in bilateral relations, but much remains to be done.

"In some aspects, there are opportunities for practical progress, but for the time being it is premature to talk about them, because additional efforts will be required, additional work by experts before we can state that the progress is evident," Ryabkov said.

"In general, there is satisfaction with what was done, but there is also an understanding of the need not to slow down, especially in bilateral relations, where a lot of difficulties have accumulated," the Russian diplomat stressed.

Ryabkov and Shannon discussed the issue over a week after the USconducted searches in the buildings of the Russian General Consulatein San Francisco and its trade mission in Washington. The move came following the US State Department's demand urging Moscow to close down its consulate general in San Francisco and two other diplomatic entities in New York City and Washington, DC by Saturday.

The Russian Foreign Ministry said that US actions constituted a violation of international law, including the Vienna convention on diplomatic and consular relations.

Commenting on the situation, Russian Foreign Minister Sergei Lavrov said that Moscow will bring the work of US missions in Russia to full accord "with what is called parity."