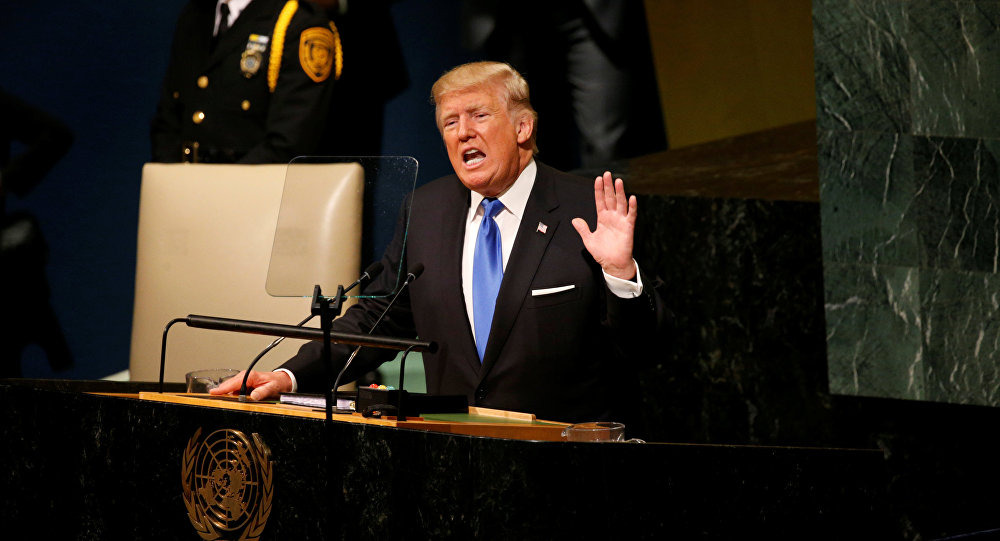 After referring to North Korean Supreme Leader Kim Jong-un as "rocket man” in front of the UN General Assembly, US Presidential Donald Trump made a slew of remarks with questionable accuracy.

Trump stepped up his aggressive rhetoric toward Tehran, berated Kim’s "suicide mission" in developing nuclear weapons, and spared zero effort touting what he claims are his own economic accomplishments. Were the claims true? Sputnik News has a quick review of key points where the president may not have been fully truthful in his comments before the UN.

US foreign policy since the 9/11 terror attacks has been nothing if not violent. US soldiers have occupied Iraq since 2003 after toppling Saddam Hussein’s regime. Since 2001, US airstrikes have peppered Yemen to reportedly eliminate al-Qaeda militants, but the UN itself calls the Saudi-led (and US-backed) coalition in Yemen the worst humanitarian crisis on earth. US forces are arriving in places like Somalia andAfghanistan in greater numbers as recently as the past month.

2.       "No one has shown more contempt for other nations and for the well-being of their own people than the depraved regime in North Korea. It is responsible for the starvation deaths of millions of North Koreans. And for the imprisonment, torture, killing, and oppression of countless more."

The US has engaged in a laborious effort to both cover up its torture program and to simply "torture for the sake of torture," former CIA officer John Kiriakou has said. To silence potential leakers of the torture program, the CIA told its own contractors who it paid to design the torture program "a nuclear bomb was going to be exploded in the United States and that because I told them to stop, I had lost my nerve and it was going to be my fault if I didn’t continue.” On these grounds, the US lacks the moral authority to preach to other nations that torture is morally wrong.

3.       "We cannot let a murderous regime continue these destabilizing activities while building dangerous missiles, and we cannot abide by an agreement if it provides cover for the eventual construction of a nuclear program. The Iran deal was one of the worst and most one-sided transactions the United States has ever entered into. Frankly, that deal is an embarrassment to the United States."

Trump has long sought to deny the basic reality that the Iran deal has worked. Since taking office, the White House has certified twice—not once, twice – that Tehran is compliant with the terms stipulated in the 2015 Joint Comprehensive Plan of Action (JCPOA). Nevertheless, Iran hawks in Washington loom large and Trump appears to have succumbed to their pressure.

4.       "Fortunately, the United States has done very well since election day last November 8. The stock market is at an all-time high, a record. Unemployment is at its lowest level in 16 years."

Plummeting unemployment trends started during President Barack Obama’s tenure; it has merely continued since Trump was elected president.  Without any major legislative victories on campaign issues such as infrastructure and tax reform, there are actually no major policies Trump can point to as evidence he did something to drive unemployment lower. To his credit, though, the promise alone of lighter regulations has helped maintain the current bull market.

5.       "In America, we seek stronger ties of business and trade with all nations of goodwill."

Daniel Kovalik, a law professor at the University of Pittsburgh School of Law in the US state of Pennsylvania, observed concisely that US sanctions against Moscow "are in fact … economic warfare against Russia.” Despite repeatedly saying he would seek to improve relations with Russia, Trump’s administration has allowed measures antagonistic to Moscow to become law. Sanctions targeting North Korea and Iran included a late provision that applied sanctions against Russia as well. Trump said the sanctions were "seriously flawed” but let them become the new norm anyway.