Gilbert Doctorow is a Senior Research Fellow of the American University in Moscow and a Brussels-based political analyst. His latest book Does Russia Have a Future? was published in August 2015.

President Trump’s decision to go before the U.N. and unmask himself as a belligerent interventionist dashed any remaining hopes that he would choose a substantively different course from his predecessors, says Gilbert Doctorow.

My political positions have very frequently been countercurrent. When American liberals were calling for Donald Trump’s head at the outset of his presidency, when Sen. Chuck Schumer and Rep. Nancy Pelosi were preaching all-out obstructionism to thwart his policies, I was urging progressives to lay down their pitchforks and try to deal constructively with the new administration for the good of the nation. 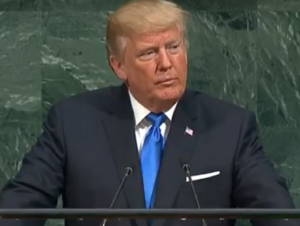 Now, in the past several weeks, in a belated show of bipartisanship, Democratic Party leaders have finally found a negotiating partner in Donald Trump, starting with a government funding bill and agreement to raise the national debt and extending to promises to protect the "Dreamers” in the sphere of immigration policy. More deals are said to be underway. In theory, that is all to the good.

However, in the meantime, this President demonstrated fulsomely in his speech to the General Assembly of the United Nations that it is high time for him to go. And that is not because of his widely discussed volatility, impulsiveness and narcissism. It is because of his irremediable stupidity, primitivism and thuggery that are leading this country on a path to commit unspeakable horrors abroad.

To be sure, Trump’s shocking debut at the U.N. comes as the culmination of a lengthy decline in civilized behavior by our national leaders over the past two decades. The swagger and bloated self-importance of George W. Bush were a preview although performed with less self-assuredness than Trump’s bluster.

President George W. Bush announcing the start of his invasion of Iraq on March 19, 2003.

After 9/11 in 2001 but before the fateful invasion of Iraq in 2003, Bush would make one or another outrageous, lying statement about international affairs, such as the "weapons of mass destruction” he alleged were retained by Saddam Hussein. Then he would pause and look into the camera with hesitation, as if wondering whether his whoppers would be swallowed by the public. Satisfied that he had gotten away with it, he would resume his rant.

That hint of self-doubt or fear of discovery disappeared over the years even as adversity on the battlefield underscored his fateful errors and even after the mismanaged economy spun apart in 2008. Bush limped to the end of his second term none the wiser.

Our far more intellectual President Barack Obama, with his term on the Harvard Law Review as seeming proof of mental and cultural distinction, never did learn to behave in a truly statesmanlike manner although he generally framed his actions in more refined rhetoric.

From start to finish, Obama conducted himself with insouciance. His well-meaning arm over the shoulder of Queen Elizabeth, which the Brits saw as disrespect for court decorum, and his chewing gum while standing before the public eye were noted by mainstream commentators. But they never noted when he slipped beyond the occasional faux pas to openly insulting behavior towards leaders of important nations.

One such case occurred when Obama stood by the side of Chinese President Xi in the White House Rose Garden for a press briefing, and said that he would be watching closely to see that the Chinese implemented the actions that had been agreed upon.

Then there was Obama likening Putin to a misbehaving schoolboy, skulking at the back of the classroom. Or Obama’s description of the whole country, Russia, as a fading regional power that produced nothing that anyone wanted. This was gratuitously insulting and degrading behavior by the leader of the world’s mightiest country.

But all of these verbal misdeeds of the recent past were nothing compared to what Donald Trump delivered on Tuesday during the 42-minute speech marking his debut before the U.N. General Assembly. Trump’s vicious remarks directed at Iran and Venezuela may have been in line with the "Axis of Evil” speeches of George W. Bush. But Trump’s threat to "totally destroy” North Korea, a country of 25 million people, if it so much as "threatened” the United States and its allies went beyond incivility.

The name Adolf Hitler is often tossed about carelessly in American political discourse. Former Secretary of State Hillary Clinton applied the Hitler comparison to Russian President Vladimir Putin when she sought to vilify him in a way that U.S. presidents avoided even in the darkest days of the Cold War in describing Soviet leaders. (In Russia, which suffered the brunt of Hitler’s aggression in World War II, the Hitler insult is taken even more seriously than it is in the United States.)

However, by threatening to annihilate an entire nation from the podium of the world’s greatest forum for peace-making, Trump cast himself as a modern-day Hitler.

Those of us who once saw hope in Donald Trump’s promises of normalized relations with the world’s other nuclear superpower were initially confused and disappointed when he appointed U.N. Ambassador Nikki Haley, who adopted run-of-the-mill neoconservative talking points, and also brought onboard military advisers with histories of supporting neocon policies, such as Defense Secretary James Mattis and National Security Advisor H.R. McMaster.

But now there is no room left for confusion or indulgence. No one can blame Mattis or Haley or McMaster. This time it was Trump himself who spoke outrageously, who delivered what some media outlets properly called a "tirade” and others, more timidly, spoke of as "bellicose.”

What marked this speech from the long series of uncontrolled, self-indulgent tweets on foreign and domestic affairs from this President was that it was a scripted speech in which every word had been weighed beforehand for its likely interpretation and public impact.

It was the speech of a thug, the words of an aggressor.

On the day of the speech, major U.S. media contented themselves with quoting Trump’s more remarkable statements, starting with his threat to annihilate North Korea and his schoolyard taunt calling Kim Jong Un "Rocket Man.” On day two, the editorial boards made more subtle observations.

The New York Times, for example, allowed itself to point to the contradiction between Trump’s celebration of sovereign nation states — with their own traditions and practices — and his call for regime change with respect to the three states singled out as "rogues” supposedly threatening the world order

In other words, Trump’s speech hinged on the notion that there should be "sovereignty” for countries that the United States favors and not for countries that the U.S. disfavors. The same fundamental contradiction was inherent in all U.S. foreign policy over the past 25 years, a case of some farm animals being more equal than other farm animals, as George Orwell observed in Animal Farm.

However, with Trump’s predecessors, this ugly reality was masked by a stress on universal values, such as democracy promotion or protection of human rights. Trump opted for a self-contradictory definition of "sovereignty,” i.e., that it means the United States has the sovereign right to overthrow any government of its choosing and even to wipe out an entire population. Whether Trump knew it or not, he was attacking the very foundation of the United Nations which was formed in the ashes of World War II to prevent future wars of aggression, to move the world’s population away from the law of the jungle.

Perhaps one could argue that at least Trump was being somewhat honest about the arrogance of U.S. power. He was pulling away the fig leaf of those nice-sounding phrases that had concealed Washington’s raw use of military power in support of the view that the U.S. should be the world’s judge, jury and executioner.

But Trump also showed that he had deceived his followers who heard – and took heart from – his criticism of both Bush and Obama for their foreign interventionism and endless wars. In contrast to those promises, Trump’s U.N. speech revealed an even more aggressive interventionism combined with a crude and boastful bluster.

Though Trump may have thought he was just tossing some more red meat to his "base,” he also disqualified himself in the eyes of many people who had hoped against hope that he might have meant what he said about respecting the sovereignty of other nations and would pull back U.S. military forces around the world.

Trump’s shocking performance before the United Nations also has added fuel to the political engine seeking his removal from office, even if the suspicions about "collusion” with Russia during the 2016 election turn out to be bogus. Many thoughtful Americans will now say that the ends will justify almost any means.

If that day comes, I wish Donald Trump a comfortable retirement on a bar stool at a Trump Tower lounge where he and his bombastic remarks belong.