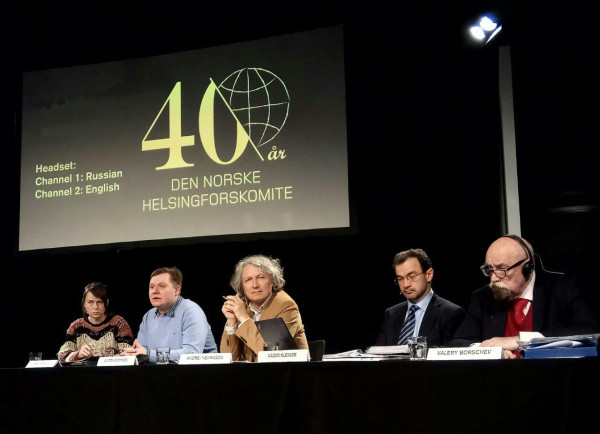 At the Q/A following the premiere of my film, "The Magnitsky Act - Behind the Scenes", in Oslo in June 2016, the Deputy Secretary of NHC Gunnar Ekeløve-Slydal put forward the idea of a hearing on the Magnitsky case. I welcomed it with enthusiasm and we, together with my colleagues at Piraya Film, went on to discuss it for quite a while. We agreed that it should be impartial and balanced, in terms of the choice of speakers and agenda. Well, today at this event, I am, basically, alone, outnumbered by, probably, a factor of 20.

(as prepared; the statement was, for the lack of time, orally delivered with minor omissions, which did not alter its intended meaning)

At the Q/A following the premiere of my film, "The Magnitsky Act - Behind the Scenes", in Oslo in June 2016, the Deputy Secretary of NHC Gunnar Ekeløve-Slydal put forward the idea of a hearing on the Magnitsky case. I welcomed it with enthusiasm and we, together with my colleagues at Piraya Film, went on to discuss it for quite a while. We agreed that it should be impartial and balanced, in terms of the choice of speakers and agenda. Well, today at this event, I am, basically, alone, outnumbered by, probably, a factor of 20.

It would be disingenuous not to recognise that every speaker here, apart from myself, represents Bill Browder’s version of his Russian activities and Sergei Magnitsky’s role in the affair. And - five minutes is all I am given to present my case.

This event is completely biased also because in its Dossier (sent to all registered participants, while I, by the way, have only received it last night) Browder's version is presented as the objective truth about the case, while the whole point of such a hearing should have been to look impartially at the story from all angles. Instead the story I dispute is painted as axiomatic fact, while my findings, which I worked on independently for many years, are called "defamatory allegations” perpetuating "Russian government disinformation”.

The Dossier contains a list of claims the film allegedly makes, each followed by a "rebuttal”. Instead of allowing the film to speak for itself NHC (which has declined to show the film) interprets the film’s findings in the way it sees fit for the "rebuttals”. But interpretations themselves are wrong! And I am not given the time to elucidate what is supposed to be my version of the events, before we even get to the so-called rebuttals. They are of course replete with misrepresentations as well.

Who is the author of this damning analysis of my work – Norwegian Helsinki Committee? Who at the committee has been watching the film, reading and analysing its documentation to interpret it in the way it is interpreted in the Dossier? Who was providing other documents for the Dossier and interpreting them? I want to know that, because I want to confront this expert on specifics he or she should understand, while I wonder why he or she has made so many mistakes? And why such an obvious bias? The only explanation I have is that the expert is Mr Browder or a member of his team. If I am wrong it would be nice and fair to be introduced to my mysterious prolific opponent before this hearing is over, thank you very much.

As I said, this hearing’s set-up is preventing me from presenting and defending my case, and I have to pick a random point to give you an example. Take a sentence, with Magnitsky’s name in it. In the „Magnitsky Dossier„on the page 126, 2e) we read:

"Magnitsky’s investigation and preparation of the complaints filed on 23rd of July 2008 about the theft of over 5 billion rubles (≈ US$230 million).”

How many of you have clicked on this link to Magnitsky’s investigation? This sounds important, doesn’t it? I am known for claiming Magnitsky didn’t actually investigate anything, so NHC seems to be proving me wrong here. Well if you do click you see something signed by a certain Paul Wrench. No trace of Magnitsky. So where’s the evidence Magnitsky investigated something?

And who is Paul Wrench then? He’s a professional figurehead director fronting many different off-shore firms including those which were controlled by Bill Browder. Paul Wrench’s signature is on the complaint to the Russian authorities claiming 230 million dollars was stolen with the help of police. Paul Wrench was questioned about this complaint, under oath at the U.S. District Court Southern District of New York on Sept 25, 2015. He said the only person he recalled discussing the content of the complaint with was Ivan Cherkasov, a U.K. based partner of Bill Browder. Again, no sign of Magnitsky.

So Paul Wrench seems to be the first person to report the 230 million dollar theft. So is he our whistleblower?

Here I’d like us to think what it exactly means to be a whistleblower.

At the same time as this complaint appeared, the story was published in a Russian newspaper (Vedomosti, № 2158 on July 24, 2008). The article was actually more detailed than Paul Wrench’s complaint. So if the tale of a theft of 230 million dollars involving police was so dangerous for them to arrest and kill Magnitsky (IF he’d been the one to report it), what happened to the journalists who in reality reported it? The answer is – nothing. Moreover a few days later (July 29, 2008) it was… suspense! - Bill Browder himself who told the terrifying story of the theft involving police – on a Moscow radio station! Again – no repercussions for those who aired this story. And more media information followed.

Mr Browder was telling me and the whole world that Magnitsky had reported the theft of 230 million dollars on Oct. 7 2008. That is, after all those publications about the theft in the Russian media. Even without them, saying something about a theft would not have been significant or dangerous, unless Magnitsky had some real evidence. And Mr Browder did try to claim that Magnitsky had actually proven the money had been stolen by the police. But not only is there no such proof, the document Browder refers to as Magnitsky’s exposing the officers’ involvement in the theft of 230 million (a transcript of the police questioning of Magnitsky on Oct. 7 2008) does not even contain their names.

But Browder and his team themselves only called Magnitsky whistleblower retrospectively. There’s an interesting video they created, uploaded on Oct 8 2009 (just a month before Magnitsky's death), on Youtube channel „Hermitage TV”: "Hermitage Reveals Russian Police Fraud." Magnitsky had been in Russian gaol for over 10 months by then, tortured for his whistleblowing every single day, according to what Browder is saying now! But not at the time. Browder just mentions Magnitsky briefly, calling him a consultant, but there's not a word about Magnitsky’s investigation, accusation of police, police trying to force him to withdraw accusations and all other things Browder is now saying he knew well at the time.

When I said to NHC that they relied in my view a little too much on Mr Browder’s sources, they referred to such an authoritative document as the Magnitsky report by the Parliamentary Assembly of the Council of Europe. Surely, that should be independent and very well researched. The report, signed by a well known Swiss politician Andreas Gross, is included in its entirety in the Dossier.

Well, in my film, Mr Gross admits that all crucial Magnitsky documents came from Browder’s sources. He also says that U.S. did not investigate the case before adopting the Magnitsky Act, though Browder "must have delivered them something”. In addition Andreas Gross admits that Magnitsky was not killed, but died of negligence.

However Mr Gross’s report itself is full of serious mistakes. Not having the time to go into detail, I’ll cite just one – on the Magnitsky case timeline: Gross‘ TIMELINE Page 74

This statement, which refers to the key issue of one of the most divisive narratives of international politics, is simply false. Magnitsky did not accuse Kuznetsov and Karpov of the crime at the centre of the Magnitsky case - the involvement in the tax reimbursement fraud, neither on this date ("5/6/2008”) nor on the date (Oct 7 2008) Mr Browder claimed he did.

The Browder team has been misrepresenting Magnitsky's answers to an investigator (that's what his statements are, not a pro-active whistleblower testimony) on June 5 and October 7 2008, and I wrote a statement for the U.S. Congress (Page 63) to elucidate the matter.

It is astonishing that the Parliamentary Assembly of the Council of Europe tolerates this level of incompetence, or worse: improper influence by a financially powerful individual under investigation in the case.

Page 32:
"It… suffers from a lack of trustworthiness, having read it.
(...) There doesn't appear to have ever been an actual hearing conducted following the dissemination of Gross's report or any drafts of his report."

Page 33
"There's no evidence that an actual hearing with the appropriate procedural safeguards was actually conducted.
Finally, the inception of this report appears to have been predicated on a series of events that bring into question certain motivational problems. The Gross report cites "earlier work" of the assembly regarding Magnitsky's death. One of the events that may have colored the investigation from the outset is William Browder's interference with the assembly's work.
In June 2011, it appears that Browder "made an intervention at a parliamentary seminar" at a meeting of the committee that ultimately authorized Gross's involvement in conducting his investigation.
Further, the Gross report is replete with statements from witnesses that are sympathetic to Magnitsky and Browder, among others. There's several individuals who were paid and directed by Hermitage to investigate Magnitsky-related events who were interviewed by Gross.
While Gross cites certain conversations he had with Russian officials and the documents he received from them, those references are eclipsed by the statements and opinions by Browder, Hermitage, and other self-interested parties."

Page 34
"In other words, the Gross report is some piece of work and I mean that in hyperbole.”

And, as I’ve exhausted the surprisingly small amount of time I’ve been given here, I’m concluding with another quotation, from a Russia expert of the U.S. State Department’s Bureau of Intelligence and Research, Robert Otto. In an email sent at the time when Mr Browder’s lawyers were working hard to ban our film, Mr Otto wrote:

"Meanwhile I am beginning to think that we are all just a part of the Browder PR machine (...) Here I will just quote from The Man Who Shot Liberty Valence (a 60s Hollywood classic movie - A.N.): When the legend becomes fact, print the legend."

For those of you who have not seen "The Magnitsky Act - Behind the Scenes", a personalised screener can be obtained from producer Torstein Grude: torstein@piraya.no

For more information about the background of the hearing please read:

# Diana West's article ”Is Seeking the Truth a Human Right?”