Four United States senators are urging a new approach to U.S.-Russian relations based on renewed arms control efforts, but you probably haven’t heard about it from the mainstream media, Gilbert Doctorow and Ray McGovern report.

Four United States senators are urging a new approach to U.S.-Russian relations based on renewed arms control efforts, but you probably haven’t heard about it from the mainstream media, Gilbert Doctorow and Ray McGovern report.

By Gilbert Doctorow and Ray McGovern 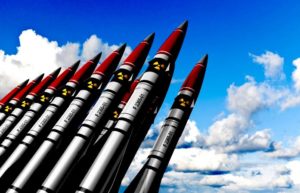 In a sad commentary on the parlous state of the U.S. media, a letter to Secretary of State Rex Tillerson from four United States Senators dated March 8 calling for opening arms control talks with the Kremlin ASAP is nowhere to be found in mainstream newspapers a day after its release on the Senate home page of one of the authors, Jeff Merkley (D-Ore.). Nothing in the New York Times.  Nothing in the Washington Post.  And so, it is left to alternative media to bring to the attention of its readership a major development in domestic politics, a significant change in what its own senior politicians are saying should be done about Russia that was brought to our attention by …..the Russian mainstream media including the agency RIA Novosti, RBK, Tass within hours of initial posting.

What we have is, first, a genuine man bites dog story.  Two of the senators who penned the letter, Dianne Feinstein (D-Calif.) and Bernie Sanders (I-Vermont), have in recent months been among the most vociferous promoters of the unproven allegations of Trump collusion with the Russians. Now they are putting aside for the moment their attacks on Trump and members of his entourage who dared shake hands or share a joke with a Russian ambassador. They are openly calling upon the Secretary of State to send U.S. personnel to negotiate with Putin’s minions over our survival on this planet.

The authors were in a tough spot explaining their new marching orders for State. And they have done their best to impose consistency on what is patently a new policy direction holding great promise for sanity to be restored in U.S.-Russian relations.

First, they cover their backsides by the lengthy recitation of Russia’s bad deeds, including alleged election meddling in the 2016 presidential election, violation of international law in Ukraine and the like.

Secondly, they make the proposed arms talks look like a walk down the Rose Garden, with the Russians being told what to do from a position of strength. The objective is focused on inserting two of Russia’s latest weapons systems described by Vladimir Putin in his March 1 speech into the framework of the START treaty as it comes up for renewal. That and to resolve issues over alleged Russian violation of the Intermediate Range Missiles convention.

However, buried in this mumbo jumbo is that reference to Putin’s speech and the new weapons systems he described, which actually numbered six among them several never heard about before inside the Beltway and looking pretty ominous.  So, one may conclude that Putin’s intended "shock and awe” speech did have some effect in DC, even if so far no one is saying so, and even if so far, our leading newspapers have called time out till they can decide how to deal with the unwelcome news.

Wittingly or not, the Gang of Four has just opened a breach in the wall of contempt and loathing for Putin and Russia that has been building in Washington for months if not years now. The immediate task is for word of this development to go out to the broad public and for the relics of our once formidable arms negotiations teams to be brought out of mothballs to face Russian counterparts who have been waiting keenly for this moment.

The unusual way in which the letter was made public — and the evident uncertainty on the part of the mainstream media as to how to play it — reflects widening fissures among Democrats.

Even among the most rabid fans of Hillary Clinton (and haters of President Trump) there is a growing sense that, for example, Congressman Adam "trust-me-the-Russians-hacked-our election” Schiff (D-Calif.) may not be able to deliver anything beyond the "trust me.”  And many are beginning to question whether the sainted Special Counsel, Robert Mueller may not be able to come up with much more than click-bait farms in St. Petersburg and dirt to put dubious characters like Paul Manafort in jail on charges unrelated to Russiagate.  (After all, Mueller has already been at it a very long time.)

And what would that mean for the re-election prospects of candidates like the superannuated Democratic-machine product Sen. Dianne Feinstein (D-Calif.), whose prospects are already waning?

Not to be ruled out is the possibility that the four senators may also be motivated by a new appreciation of the dangers of blaming everything on Russia, with the possible result of U.S.-Russia relations falling into a state of complete disrepair. The key question is whether President Putin can be de-demonized. That will depend on the mainstream media, which, alas, is not accustomed to reassessing and silencing the bellicose drums — even in the face of new realities like the petering out of Russiagate and Putin’s entirely credible declaration of strategic parity.

Gang of Four Letter to Secretary of State Rex Tillerson

We write to urge the State Department to convene the next U.S.-Russia Strategic Dialogue as soon as possible.

A U.S.-Russia Strategic Dialogue is more urgent following President Putin’s public address on March 1st when he referred to several new nuclear weapons Russia is reportedly developing including a cruise missile and a nuclear underwater drone, which are not currently limited by the New START treaty, and would be destabilizing if deployed.   There is no doubt we have significant disagreements with Russia, including Russia’s brazen interference in the 2016 U.S. elections; continued violation of the Intermediate Range Nuclear Forces Treaty (INF); invasion of Ukraine and illegal annexation of Crimea; and destabilizing actions in Syria. However, it is due to these policy rifts, not in spite of them, that the United States should urgently engage with Russia to avoid miscalculation and reduce the likelihood of conflict.

First, we encourage the administration to propose alternative solutions to address Russia’s violation of the Intermediate-Range Nuclear Forces Treaty (INF).  Russian Deputy Foreign Minister Sergei Ryabkov admitted to the existence of this ground launched cruise missile (GLCM), but contended that the system was INF Treaty compliant.

Senior officials from the United States and Russia have said that the INF Treaty plays an "important role in the existing system of international security.” As such, we urge the State Department to resolve Russia’s violation through existing INF Treaty provisions or new mutually acceptable means.

Second, we urge the United States to extend the New Strategic Arms Reduction Treaty (New START).  The Trump administration’s own 2018 Nuclear Posture Review (NPR) references Russia’s robust nuclear modernization program as a main justification behind the U.S. need to recapitalize its three legs of the nuclear triad.  An extension of New START would verifiably lock-in the Treaty’s Central Limits – and with it – the reductions in strategic forces Russia has made.

The New START Treaty, which entered into force in 2011, provides transparency and predictability into the size and location of Russia’s strategic nuclear delivery systems, warheads, and facilities. New START’s robust verification architecture involves thousands of data exchanges and regular on-site inspections.The United States confirmed in February that Russia met New START’s Central Treaty Limits and it stated that "implementation of the New START Treaty enhances the safety and security of the United States.” These same Central Treaty Limits could also govern two of the new types of nuclear weapons referenced by President Putin on March 1st – a case the United States can argue through the Treaty’s Biannual Consultative Commission (BCC).

Lastly, as the 2018 Nuclear Posture Review notes, Russia maintains a numerical advantage to the United States in the number of non-strategic nuclear weapons. The Senate, in its Resolution of Ratification on New START in 2010, took stock of this imbalance and called upon the United States to commence negotiations that would "secure and reduce tactical nuclear weapons in a verifiable manner.” Attempts by the Obama administration to negotiate an agreement on this class of weapons met resistance from Russia.  However, even absent the political space for a formal agreement or binding treaty with Russia, we urge the State Department to discuss ways to enhance transparency on non-strategic nuclear weapons.

Extending New START, resolving Russia’s INF violation, and enhancing transparency measures relating to non-strategic nuclear weapons will also help quiet growing calls from many countries that the United States is not upholding its Nuclear Non-Proliferation Treaty (NPT) obligations.  The Treaty’s three mutually reinforcing pillars: non-proliferation, peaceful uses of the atom, and disarmament can only be advanced through U.S. leadership on all three.

There is no guarantee that we can make progress with Russia on these issues.  However, even at the height of Cold War tensions, the United States and the Soviet Union were able to engage on matters of strategic stability.  Leaders from both countries believed, as we should today, that the incredible destructive force of nuclear weapons is reason enough to make any and all efforts to lessen the chance that they can never be used again.

Gilbert Doctorow is an independent political analyst based in Brussels. His latest book, Does the United States Have a Future?was published in October 2017. Both paperback and e-book versions are available for purchase on www.amazon.com and all affiliated Amazon websites worldwide.

Ray McGovern works with Tell the Word, a publishing arm of the ecumenical Church of the Saviour in inner-city Washington. He served in Army and CIA intelligence analysis for 30 years and, after retiring, co-founded Veteran Intelligence Professionals for Sanity (VIPS).