Daniel Lazare is the author of The Frozen Republic: How the Constitution Is Paralyzing Democracy (Harcourt Brace, 1996) and other books about American politics. He has written for a wide variety of publications from The Nation to Le Monde Diplomatique, and his articles about the Middle East, terrorism, Eastern Europe, and other topics appear regularly on such websites as Jacobin and The American Conservative.

It falls to Germany to save the Iran nuclear deal and try to prevent a devastating new Middle East War, argues Daniel Lazare.

In the wake of Donald Trump’s thoroughly unsurprising decision to scuttle the Iran nuclear accord, two countries that may be most in the hot seat are Germany and Russia.  The big question now is whether their mutual discomfort leads them to find common cause.

Angela Merkel’s plight is especially painful.  Not only are Germany’s extensive business links with Iran at risk thanks to Trump’s decision to re-apply sanctions, but the German chancellor’s political fortunes have taken a beating thanks to years of American incompetence in the Middle East.

In Libya, then-Secretary of State Hillary Clinton devoted two weeks during the 2011 Arab Spring to persuading Qatar to join the anti-Gaddafi coalition, only to stand by and watch as the oil-rich emirate seized the opportunity to distribute some $400 million to murderous Salafist rebels spreading anarchy from one end of the country to the other.  The result was a failed state that soon turned into a jumping-off point for hundreds of thousands of desperate refugees making their way to Germany and other parts of the European Union.

Remarkably, Clinton did the same thing a few months later in Syria by teaming up with Saudi Arabia, Qatar, and other Arab gulf states to fund what would soon become a full-scale Islamist invasion.  The upshot: more murder and mayhem, more refugees, and more terrorism when ISIS – funded by the Saudis and Qataris according to no less an authority than Clinton herself – decided to extend its jihad to Paris, Brussels, Nice, Manchester, Barcelona, and Berlin starting in November 2015.  As if that weren’t enough, Washington irritated its German partners by opposing the Nord Stream II natural gas pipeline, a Russo-German project headed by ex-Chancellor Gerhard Schröder, and then, under Trump, by pulling out of the Paris climate accords last June. 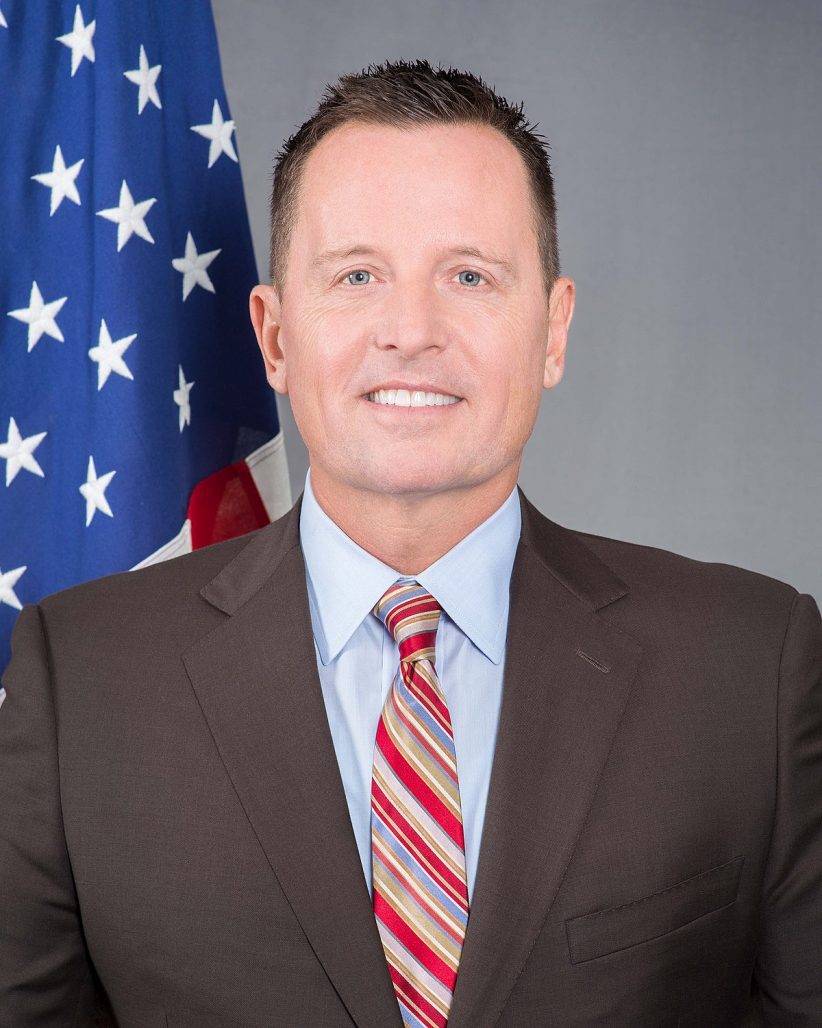 election while the anti-immigrant Alternative für Deutschland saw its portion more than double. Now, Trump’s decision to dump the Joint Comprehensive Plan of Action, as the Iran nuclear agreement is formally known, is making matters much, much worse.  First, Israel took advantage of the move to launch its biggest attack on Syria since the 1973 Yom Kippur War, raising prospects that Middle East chaos may be poised for yet another upsurge.  Then US Ambassador Richard Grenell showed what America really thinks of its German partners by tweeting: "As @realDonaldTrump said, US sanctions will target critical sectors of Iran’s economy.  German companies doing business in Iran should wind down operations immediately.”

Grenell, a former Fox News commentator, sounded like an all-too-typical American boss barking an order at an unpaid intern.  Luxembourg Foreign Minister Jean Asselborn described the tweet as an "impertinence” while Andrea Nahles, leader of the center-left German Social Democrats, said: "It’s not my task to teach people about the fine art of diplomacy, especially not the US ambassador.  But he does appear to need some tutoring.”

Quite right.  But Germany is not the only one feeling the pain – Russia is too.  It is allied with Iran in support of Syria’s embattled president Bashar al-Assad, yet has somehow managed to maintain good relations with Israel.  This is why Putin invited Benjamin Netanyahu to be his personal guest at this week’s May 9 Victory Day celebrations in Moscow where the Israeli prime minister joined Serbian President Aleksandar Vucic in laying a wreath on the Soviet Tomb of the Unknown Soldier.  When Putin paid tribute to the Soviet troops "who saved Europe and the world from slavery, from the horrors of the Holocaust,” by defeating Nazi Germany (quote begins at 2:00), there was no doubt as to whom he was addressing.

But the celebration also featured a traditional Red Square military parade featuring not only unmanned robo-tanks and Sukhoi Su-57 stealth fighters, but mobile batteries of anti-aircraft missiles. Less than twelve hours later, Netanyahu showed his thanks by destroying at least five Russian-made anti-aircraft batteries as part of the assault on Syria.  According to the Israeli military, Israel notified Russia of the impending attack via "deconfliction” procedures in place since September 2015 – which means that Russia more or less assented to the destruction of its own defense systems.

It’s Up to Germany

This can’t go on, especially with Israel intervening ever more heavily on the side of pro-Al Qaeda rebels whom Russia, Iran, and Syria are trying to repel.  The more the battle intensifies, the more impossible Putin’s position will become.

The man needs back-up, but from where?  The answer lies in the other signatories to the JCPOA – China, the UK, France, and Germany.  But the first is preoccupied with events in the Far East, the second is in political disarray, while the third is a joke thanks to the preening and arrogant Emmanuel Macron.  That leaves Germany.  If it provided Russia with even a modicum of support, the upshot could be a major shift in the way the deadly game of Middle East politics is played. 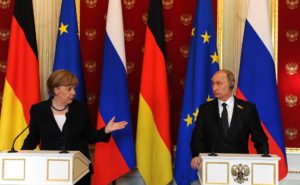 Merkel: A turn to Russia?

Germany has real clout with regard to the Jewish state. It is Israel’s biggest trading partner in Europe and, after the US, its second largest trading partner overall.  It is an important cultural and scientific partner, while Berlin, in one of history’s more delectable ironies, is now home to one of Israel’s largest expatriate communities, some 15,000 Jews and Arabs who find life in the German capital freer and more vibrant than back home and, as a consequence, have peppered it with Hebrew-language kindergartens, a Hebrew library, a Hebrew literary magazine, a Hanukkah market, and Iranian-Israeli techno parties.

The same goes for Germany and Iran.  As Gary Leupp recently pointed out in Counterpunch,Germany comprises sixty percent of EU investment in the Islamic state where it sells machinery, metals, chemicals, and agricultural products.  With Daimler recently signing an agreement with Iranian Khodro to produce Mercedes-Benz motor vehicles, its investments are currently increasing at a rate of around about twenty-five percent per year.

Amid inflation, a currency crisis, and a growing strike wave, Iran is grateful for such business and desperate for more.  So when Germany talks, it listens.  Syria, much of which resembles postwar Berlin after a half-dozen years of imperialist assault, would listen as well if Germany gave it half a chance.  Indeed, it would be so grateful for the slightest olive branch that Damascenes would no doubt take to the streets in celebration.

So a joint Russo-German diplomatic offensive could provide the basis for a genuine realignment.  Needless to say, there are a thousand and one reasons why this won’t occur.  Germany walks on eggshells when it comes to Israel for obvious historical reasons and is therefore reluctant to do anything that might anger the Jewish state.  It routinely defers to the US, which midwifed the German Federal Republic in 1949 and provided it with a veneer of political legitimacy in the ensuing decades.  Public intellectuals like Jürgen Habermas have made careers out of arguing that Germany’s future lies in deeper and deeper integration with the liberal west, while NATO and the EU insure a deepening western orientation as well.

If Germany were to turn in the other direction, the protests would be deafening not only in Washington, Paris, and London, but in Berlin.  They would be even more so in Poland, the Ukraine, and the Baltics where local nationalists, many leaning in an increasingly fascist direction, have come to rely on unbroken western support.

It would be a dangerous leap into the unknown on the part of a country that couldn’t be more risk averse.  But Germany may have no choice.  Trump is nuts, American power is receding more rapidly than anyone would have thought possible two or three years ago, while western liberalism is crumbling as well.  Hardliners are in control in Washington where Republicans and Democrats compete to see who can be more obsequious to Israel and more hostile to all things Russian.  The same goes for Tel Aviv and Tehran where, thanks to Trump, the hardliners are equally in the saddle.

If there are two countries that know what can happen when the crazies are in control, it’s Russia and Germany.  But now that history has placed them in the same boat as it approaches the cataracts, Putin, for one, is rowing madly.  Will Merkel lend a hand with the oars?