Simon Jenkins is a Guardian columnist 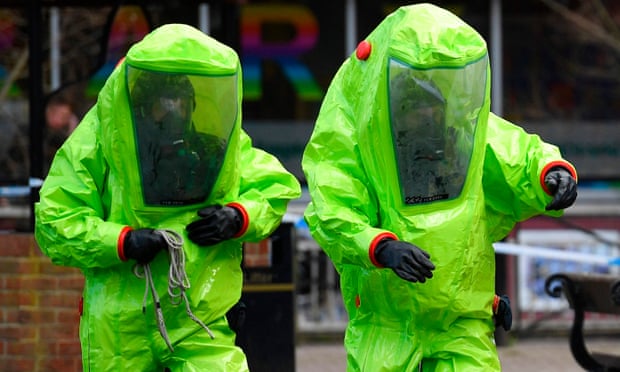 Members of the emergency services respond after Sergei Skripal and his daughter Yulia were poisoned in Salisbury in March. Photograph: Ben Stansall/AFP/Getty Images

Secret agencies have their methods, unknown to their superiors, and no one’s hands are clean. The response to this attempted murder has been infantile

There is "no spectacle so ridiculous as the British public in one of its periodical fits of morality”. The poet Thomas Babington Macaulay might have had in mind the saga of the

That members of a security agency should have a vendetta against someone they regard as a traitor is unsurprising. Britons would hardly have turned a hair if something nasty had happened in Moscow to British double agents Guy Burgess, Donald Maclean or Kim Philby. Fed on a diet of extrajudicial spy killings, they assume that in this murky, pseudo-glamorised world traitors get their due deserts.

British justice loves geography. Few Britons realise how far, to Russians, London has become a Muscovite home from home. Under the money-laundering tolerance of Tony Blair and David Cameron, it was another Monaco or Cayman, an "oligarchia” of property bolt-holes and dodgy dealers, where no questions were asked and only money talked. To Russians, the idea of British authorities citing the rule of law and getting high and mighty about injury to a superannuated spy is laughable.

This is not about justice but about proportionate response. How many attempted murder victims in south London get the exclusive attention of 250 police officers for six months, and prime ministerial statements in parliament? From the start, the Skripal attack could have been treated as a local crime. It is clear that the police soon suspected the two Russians, and knew there was no way of bringing them to court. The case could have gone back in the pending file, and Putin accused of being a pathetic figure unable to control his own mobsters.

Instead it was turned into an international crisis, with Putin as a mastermind of gigantic evil. May leapt into the fray. The attempt on Skripal’s life was "a chemical attack on British soil”, as if Putin had personally sent sarin canisters raining down on hospitals and schools. At the Foreign Office at the time, Boris Johnson exultantly called it an "

Ever since the fall of the Soviet Union in 1989, Europe’s democracies have driven Russia down the path on which Putin is set. They debilitated his predecessor, Boris Yeltsin. They denied Russia aid and trade. They pushed Nato’s boundaries to Russia’s border and taunted it with encirclement. London embraced Russia’s kleptocrats and bled it dry of its resource wealth. For a leader such as Putin, Europe was Lenin’s useful idiot.

Now Moscow is on a roll. Despite domestic angst over pension reform, Putin’s foreign policy is cruising. EU ineptitude is allowing him to re-establish cold war allegiances, with admirers in Poland, Hungary, Slovakia, the Czech Republic, Serbia and even Germany. His economy may be in a mess, but who cares when he has America and Britain dancing like marionettes on a string? So some hitman goofs in Salisbury. In return we let Putin mock us and parade his injured innocence before the world. Everything we do – everything – helps him.