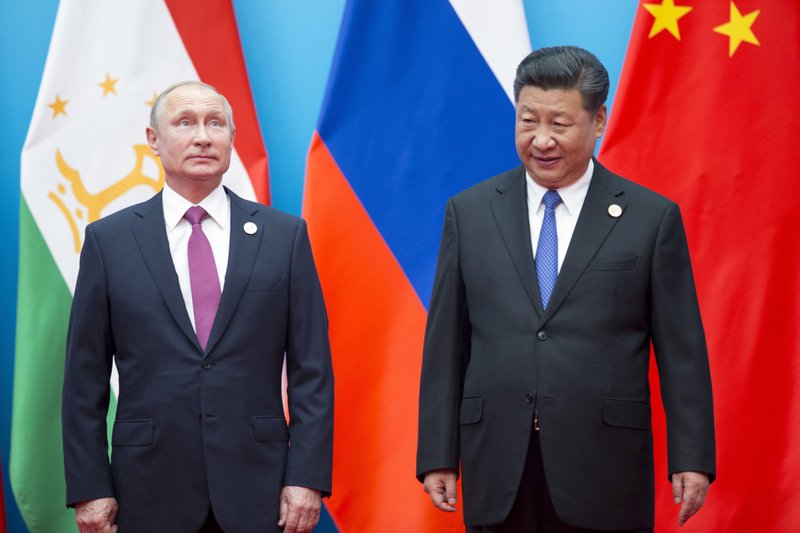 MOSCOW (AP) — When Russian President Vladimir Putin and Chinese President Xi Jinping meet this week, they will have plenty to talk about thanks to U.S. President Donald Trump.

MOSCOW (AP) — When Russian President Vladimir Putin and Chinese President Xi Jinping meet this week, they will have plenty to talk about thanks to U.S. President Donald Trump.

Xi is traveling to Vladivostok, in the Russian Far East, on Tuesday and Wednesday for an economic conference where he’s expected to meet with Putin, while China joins vast Russian war games for the first time.

Neither side has said what they’ll discuss, but Trump’s policies on trade and North Korea are topics of interest to both Russia and China. And U.S. sanctions on Russia have played a role in driving Russia and China closer together.

The setting is also symbolic — Vladivostok and the Russian Far East are developing close ties with China, including a vast new casino complex aimed at attracting Chinese high-rollers.

"Russia is the first choice for Chinese tourists these days. First of all, people here are nice and warm. Secondly, you come here, and the ruble is falling, so it’s practical,” said local businessman Liu Xing An.

Here is a look at key Russia-China issues.

China is sending 3,200 troops to take part in Russia’s vast Vostok (East) military exercises this month. They’re scheduled every four years and some previous versions have modeled scenarios similar to a Russia-China conflict.

"It sends a very strong message to China, saying that Russia doesn’t see China as an adversary or a military threat any more,” says analyst Alexander Gabuev, who follows Russia-China relations for the Carnegie Institute in Moscow.

"It also sends a signal to Washington, DC, saying that if the U.S. continues on its current course by pressuring Russia and imposing more sanctions, Russia will fall even more into the firm embrace of China, America’s only strategic competitor in the 21st century.”

Russia’s involvement in the war in Syria could also offer some lessons for China’s military, which last fought a war against Vietnam in 1979.

Russia and China have a growing trade relationship, with Russian oil, gas and foodstuffs moving in one direction, and Chinese consumer goods in the other.

It’s not always clear sailing, though. Some big deals announced at previous summits have stuttered or never been realized, and a $9 billion deal for Chinese company CEFC to take a stake in Russian state-controlled oil company Rosneft collapsed in March when Chinese media reported that the head of CEFC had been detained by government investigators.

U.S. policy has also driven Russia and China closer together commercially. For Russian companies, China offers investment with much less risk of being affected by U.S. and European Union sanctions, though Gabuev says it can be "painful and uncomfortable” for big Russian firms to negotiate with China as a junior partner, when they’re used to dominating trade relationships with other neighboring countries. Chinese companies see Russia as a supplier which won’t come under any new U.S. tariffs.

Both Russia and China have a direct interest in the future of North Korea since they both share a border with the secretive nuclear-armed nation, although the Russia-North Korea border is much smaller at just 17 kilometers (11 miles) long.

"There is a very strong chance that Putin and Xi will talk about North Korea,” says Gabuev, who likens China and Russia’s differing approaches to North Korea to a good cop/bad cop approach. "China wanted to appear as helpful to the U.S. and was imposing a lot of (United Nations) sanctions and was pretty strict by Chinese standards, whereas it was Russia that provided a lot of channels for (North) Korea to violate sanctions.”

Sanctions enforcement is a complex issue for both countries since both have employed cheap North Korean labor in the past. In Russia, that even included construction workers toiling on the World Cup soccer stadium in St. Petersburg, where one worker was reported to have died.

Russia and China tend to keep any disagreements out of the public eye, but some areas of their relationship are more tense.

The two countries vie for political influence over the ex-Soviet states of Central Asia. Turkmenistan, for example, used to sell almost all its natural gas to Russia — which could then export it for a healthy mark-up — but it now sells mostly to China.

Chinese migrants in Russia, estimated to number in the hundreds of thousands, are also often on the margins of society and have occasionally been targeted by Russian migration officials who fear an "invasion” of the sparsely populated Far East region.