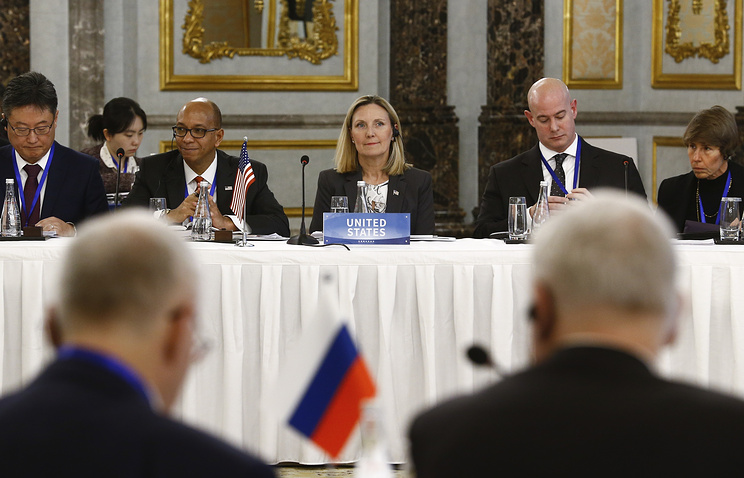 Top stories in the Russian press on Wednesday

Top stories in the Russian press on Wednesday

Photo: US delegation at the NPT conference in Beijing

The five nuclear powers (Russia, the United States, the United Kingdom, France and China) are meeting in Beijing on January 30-31 to discuss arms control issues. Chances are that the meeting’s participants will touch upon the issue of the Intermediate-Range Nuclear Forces Treaty (INF Treaty) that the US is planning to leave, Nezavisimaya Gazeta notes.

However, America’s major concern is about China and its ground-based missiles, while Russia’s alleged violations are only an excuse for withdrawing from the accord.

Experts believe that suspending the INF Treaty is an option. "The Americans gave official notification about their pullout six months in advance and after that the document has remained in effect for six months," Deputy Director of the CIS Countries Institute and military expert Vladimir Yevseyev told the newspaper. "Once the deadline expires, the document becomes null and void. This is how the pullout process would work. Usually, the move is justified by citing alleged threats to national interests or national security. In this case, our cruise missile (the 9M729) will be touted as the reason. We have failed to reach a compromise because the United States’ position was unconstructive from the very beginning. Washington first decided to withdraw from the treaty and then started looking for reasons. The move to leave the document stems from Pentagon experts’ assessments, which showed that the US is incapable of creating ground-based hypersonic missiles with a range of over 5,500 kilometers. After that, tensions started escalating," Yevseyev pointed out.

The expert believes that Russia was ready for dialogue with the US. "The demonstration of our missile proved it, but the US was unwilling to hold dialogue from the very start," he explained. "Even before [US National Security Adviser John] Bolton came to Moscow, a decision had been made to include a program to create a ground-based cruise missile into the US military budget, which violates the INF. It means the decision was made much earlier. Washington is particularly driven by the need to deter China and the desire to tarnish relations between Russia and Western Europe, first and foremost, Germany, and so it blackmails Berlin, threatening to deploy new US intermediate-range missiles to the country," the expert noted.

Ways to resolve the issue of customs duties on a range of Moldovan goods and the Transnistria problem will be the focus of talks between Russian President Vladimir Putin and his Moldovan counterpart Igor Dodon, who arrived on an official visit to Moscow on January 30, Izvestia reports.

According to Dodon, "it will be a working meeting that will make it possible to talk about bilateral relations." "Russia is an important strategic partner for us so we need to maintain dialogue concerning all areas of cooperation, including trade, the energy sector, migration matters, the humanitarian sphere and the Transnistria issue," he pointed out.

The Moldovan president stressed that the country was concerned about the transit of goods to Russia via Ukraine. As Dodon said, on the one hand, the parties managed to agree on the removal of customs duties on Moldova’s five major item groups starting from January 1. However, on the other hand, the export of two of the five group of goods is impossible at the moment because the Russian government’s decree banning the import of Ukrainian goods and products delivered from other countries via Ukraine took effect on January 1. "Because of that, our exporters have to find routes to bypass Ukraine. Given this situation, Moldovan manufacturers are clearly shouldering additional expenses, so we hope to find a way out," Dodon said.

When touching on the Transnistria problem, he noted that "over the past two years, we have managed to sort out many issues that had long remained unresolved." He particularly stressed that he had held five meetings with Vadim Krasnoselsky, the leader of Transnistria. According to Dodon, much depends on the Moldovan parliamentary election, scheduled to be held in a month. "In fact, the election will answer the question of whether we will be able to continue moving towards a political solution. I hope that the parliamentary election will pave the way for that," the Moldovan president said.

The Russian Academy of Sciences (RAS) has announced a planned breakthrough in an area dubbed science diplomacy. RAS President Alexander Sergeev said that top administration officials from Russia’s principal scientific establishment would visit the US in March to sign a cooperation agreement with the National Academy of Sciences. RAS Vice President Yuri Balega told Kommersant that the focus of the visit would be on cooperation in space research.

Balega revealed some details of the deal between the two academies. "The document first and foremost concerns space research. Joint lunar exploration will be a priority, while Venus is also very important," he said, adding that NASA officials would attend the March meeting in Washington.

The academician said that the Russian delegation would particularly comprise prominent medics. "There are plans to thoroughly discuss joint research in the area of oncology and neurosurgery," he noted. Besides, ocean exploration will also be covered. "I don’t rule out that the meeting’s participants will discuss some other issues as well, but certainly, only scientific ones," Balega noted.

The RAS vice president pointed out that Soviet and Russian researchers used to actively participate in discussions of arms control issues and ways to counter terrorism. "As you can imagine, it is impossible to address the topic of nuclear weapons without physicists and chemists," Balega explained. "In the past, our academy’s members participated in such meetings on a regular basis. But for now, we have decided to discuss only scientific matters," he added.

Chemist Artyom Oganov, a professor at the Skolkovo Institute of Science and Technology, who worked in the US for many years, told the newspaper about differences between the United States’ National Academy of Sciences and the Russian Academy of Sciences. "The American academy can be described as kind of a researchers’ club. Neither businessmen nor politicians can become members. Only people who actually made a significant contribution to global science become academicians in the US," he said. The researcher stressed that the National Academy of Sciences often times "expresses the academic community’s stance on social issues." "Cooperation between scientists may become a glimmer of hope compared to all the negativity between our countries," Oganov said.

Shortly before the US-Chinese trade negotiations kick off on Wednesday, Washington had moved to turn the heat up on Beijing, bringing criminal charges against officials from Huawei. The Americans still have the upper hand in the economic race with China, so Beijing will have to make concessions, said Russian experts interviewed by Nezavisimaya Gazeta.

Washington’s grievances against Chinese hi-tech companies are part of efforts by the US to ensure its technological leadership. Chinese authorities made it clear that they want to become number one in this area three years ago, when they unveiled the Made in China 2025 program, aimed at creating global champions capable of defeating western technological giants. US President Donald Trump took China’s ambitions almost as a personal insult.

"The current trade truce between China and the US will last until March. If the two countries fail to reach an agreement by that time, then the trade war will resume and China will have no chance to fight on equal footing with the US," said leading analyst at Amarkets Artyom Deyev. China’s huge exports to the US are in fact Beijing’s weak point, he explained. "Since the trade conflict emerged, the outcome has been clear. The US growth rate has slowed down, but it still remains at the highest level in years. And as for China’s GDP, 2018 turned out to be the worst in 28 years," the expert noted.

"The US has more leverage in talks than China," said Head of the School of Oriental Studies at the Higher School of Economics Alexei Maslov. Beijing’s crucial advantage is the production and supply of basic goods to the US but the odds are still in Washington’s favor as it is capable of controlling financial flows, the movement of goods and access to markets.

However, according to Associate Professor of the Economic Theory Department at the Plekhanov Economics University Yekaterina Novikova, "China has launched innovation processes in many sectors so even if the US puts an end to all cooperation, China will continue moving towards technological leadership." "Today, we can say that three global hubs have already emerged - the US, China and Germany. It means China has become a center of development on par with the United States. And this status of the Chinese economy cannot be ignored," the expert stressed.

Poland’s gas transport operator Gaz-System and Denmark’s Energinet have eventually agreed to construct what they dub as the Baltic Pipe gas conduit to reduce Poland’s dependence on Russian gas. However, it turned out that before implementing the project, the companies will have to make an additional agreement with Russia’s Gazprom, which is building the Nord Stream 2 pipeline. The matter is that the routes of the two pipelines will cross in the Baltic Sea. It means that Poland may find itself even more dependent on Russia though experts believe that Gazprom will not abuse its position.

Poland, which has been buying pipeline gas from Russia since 1944, regularly announces plans to end these purchases. The current contract will expire in 2022 and Warsaw expects that LNG and Norwegian supplies will replace Gazprom’s share. The Baltic Pipe project is planned to transport Norwegian gas from the North Sea continental shelf via Denmark.

If the pipeline routes cross, operators will indeed have to come to an agreement, and not only with each other. Nord Stream and Nord Stream 2 are major high-pressure gas pipelines and the integrity of their infrastructure is guaranteed by rules concerning protected zones, Executive Partner at the Pravo and Biznes firm Alexander Pakhomov told the newspaper. Any works that may damage pipelines are banned within such zones. If routes cross, a need will arise to request permission from the Nord Stream 2 AG and the relevant country’s authorities.

"In theory, Gazprom can block the implementation of the Baltic Pipe project along the current route, pointing out that the already existing pipeline may suffer damage while a new one is being built. But technically, such a crossing is not an insurmountable obstacle, provided the parties make an agreement. If a crossing between the two major pipelines is inevitable, then the Polish and Danish companies need to immediately start investing into the development of technological decisions to resolve this issue instead of speculating about how Gazprom will surely block their project," Pakhomov elaborated.

The advantage is still in Russia’s court, for one-third of the Nord Stream 2 pipeline has already been built, while the Baltic Pipe doesn’t even have a budget yet.