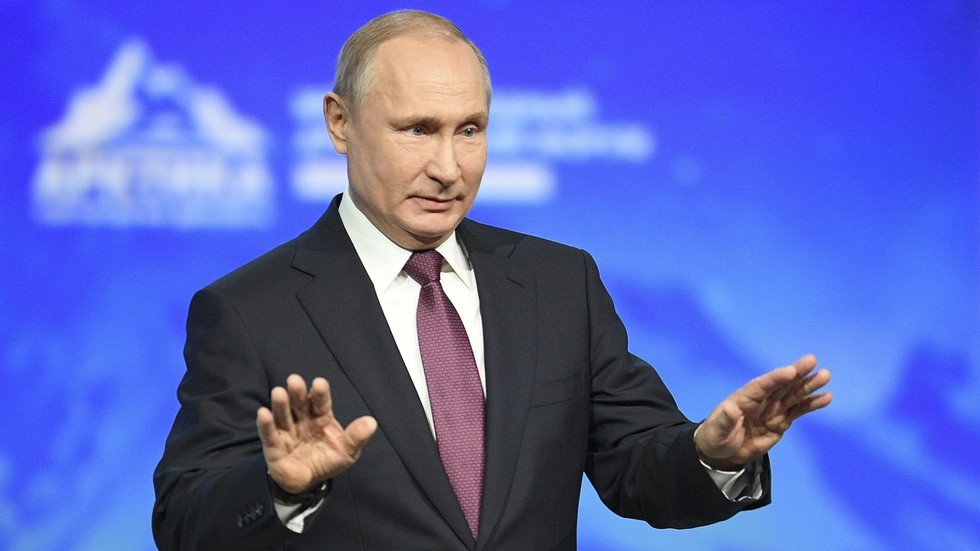 Describing Robert Mueller’s probe as "nonsense,” Russian President Vladimir Putin said Moscow will work with the US no matter who wins in 2020. He also brought up the plight of polar bears as US and Russia face off in the Arctic.

Describing Robert Mueller’s probe as "nonsense,” Russian President Vladimir Putin said Moscow will work with the US no matter who wins in 2020. He also brought up the plight of polar bears as US and Russia face off in the Arctic.

"A mountain that has brought forth a mouse,” is the metaphor Putin used at the Arctic Forum in St. Petersburg on Tuesday, to describe the two-year investigation by Special Counsel Robert Mueller that sought evidence of conspiracy or collusion between US President Donald Trump and Russia, but failed to find any.

The probe was a "complete nonsense, only aimed at a domestic audience” in the US, the Russian leader told the moderator, Bloomberg’s John Fraher. The unsubstantiated accusations against Trump revealed a "crisis” in the American political system, where the elites are divided and "party interests are put ahead of those of the nation and society,” Putin pointed out.

Pointing out how media attacks on the US president continued despite the Mueller probe’s futility, Putin expressed hope that the "witch hunt” won’t be a repeat of what he called a "dark page” in US history. He left unspecified whether he was referring to the 17th century Salem witch trials, or the frantic search for alleged Communist agents led by Senator Joseph McCarthy in the 1950s.

Russia will work with whoever wins 2020

When asked if Moscow was interested in Trump’s re-election in 2020, the Russian leader replied that "it has nothing to do with us” and that Russia "respects the choice of the American people and is eager to work with whoever becomes president.”

It is regrettable that relations between Moscow and Washington have become hostage to internal political games in the US, Putin added, but again underlined Russia’s willingness to work together with Washington on important issues – once the US was ready.

"I think all sides are interested in this. As soon as the right conditions [in the US] present themselves, we’ll start working,”Putin said, bringing up "terrorism, epidemics, ecology and arms control” as the areas in which cooperation between the two countries would be essential.

Think of the polar bears!

One of those issues is obviously the Arctic, where US and Russia both make overlapping territorial claims – along with Canada, Denmark and Norway, all NATO members.

Putin noted that Russia’s military activity in the region was "substantially lower” than of the US-led NATO, adding that military tensions were thankfully "absent” from the region..

"I pity the bears – polar bears, in this case” and all polar wildlife, the Russian president said at one point, urging all the stakeholders to keep the environment in mind as they race to develop the Arctic circle.