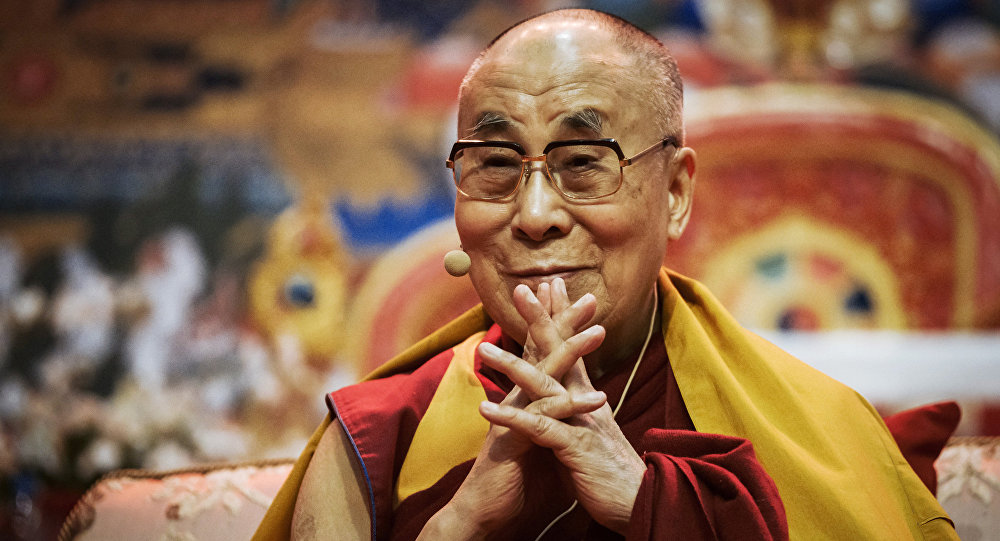 MOSCOW (Sputnik) - The Tibetan Buddhist spiritual leader gave an interview to Sputnik in which he explained why Russia can make a significant contribution to the promotion of peace of mind.

Russia – Bridge Between East And West

Tenzin Gyatso, known as the 14th Dalai Lama, an important figure who represents Buddhist values and traditions, believes that Russia is "a bridge between the East and the West."

"Russia is a big nation and a bridge between Europe and Asia. I think you [Russia] can make some significant contribution to the promotion of peace of mind", he noted.

The Dalai Lama hailed the initiatives of the Russian president toward the situation in many countries across the globe.

"I think that Russia is a great nation, very powerful. Recent events showed that Putin as a leader of the Russian nation pays more attention to the issues in different parts of the world. I think that is good", he admitted.

The whole world is facing a very difficult period, the Dalai Lama said in an apparent reference to numerous conflicts and arguments.

"Today the world is passing through a critical period. In such a time President Putin should think very carefully, take into consideration a wider perspective and a long-term interest. That's important", he stressed.

'Trump Should Not Sell Weapons To Saudi Arabia'

The policies of US President Donald Trump did not escape the attention of the foremost spiritual leader of Tibetan Buddhism.

"President Trump is the leader of the great nation and carries great responsibility. I think the leader should think of a wider perspective and long-term interest – that's important. He should not think just of immediate benefits", he said.

The Dalai Lama, however, noted that Washington is selling weapons to its closest Middle Eastern ally, Saudi Arabia.

"President Trump, of course, it is his work. I have no right to criticize, but he has sold billions of weapons to Saudi Arabia. I think this is wrong. He also withdrew from the Paris climate accord. This is unfortunate", he said.

Saudi Arabia has been unleashing a military campaign in Yemen since 2015. Now the Yemeni nation, ripped by diseases, starvation and lack of proper medical care, faces the worst humanitarian crisis in its modern history.

Tibet's spiritual leader believes that monarchy as a form of a political system is totally outdated.

"A few days ago the Japanese emperor [Naruhito] acceded to the throne, and yesterday a new British prince was born [Prince Harry and Meghan Markle's royal baby]. I really feel that [monarchy] is outdated. Russian Bolshevik revolution eliminated the czarist rule, and the French Revolution also eliminated the king’s rule. I feel this is right. All these kings, queens are part of old thinking. In that system, there was too much emphasis on military power", he said.

According to the Dalai Lama, democracy is the only acceptable system in today's reality.

"Today time has come for democracy. The world belongs to seven billion human beings, each country belongs to people of that country. When people think properly, are educated, then I don't think they would be determined to kill each other. I don't think so", he said.

The European Union can be an example of such a system, the Dalai Lama stated.

"Take for example the European Union. In the previous century, the member states fought each other, killed each other. Then after World War II the very nations who were really involved in violence – France and Germany – they realized that now it’s much better to think about common interest rather than Germany’s interest, or France’s interest. This is a realistic approach. So the European Union was created, and in the last few decades there was no killing among its member states", he noted.

He even suggested that Russia should once join the European Union.

The Dalai Lama admitted that Buddhism has a special connection with Russia.

He recalled that through centuries Russia already has had this knowledge and contacts with Buddhism.

"So, therefore, I really feel Russian Buddhists should pay more attention to the study of Buddhism. You can take from the Buddhist literature knowledge about psychology, quantum physics, logic and study it in the academic context. It’ll be of benefit for all people – religious people and non-believers", he noted.

He stated that many people from Mongolia and Buddhist regions of Russia are currently studying in Tibetan monasteries in India.

The Dalai Lama admitted that all religions are like medicines that help the believers "achieve peace of mind."

"I am a Buddhist. But I never say that Buddhism is the best religion. All major religious traditions are like medicine, they all help to achieve peace of mind. So we cannot pick up one medicine and then say this is the best for everybody. You cannot say this. The doctor first examines the patient's condition. Then he can recommend: for your case this medicine is the best. Similarly, among the believers there are so many different mental dispositions", he said.

Tibet's spiritual leader stated that for different people different religions and religious practices can be effective.