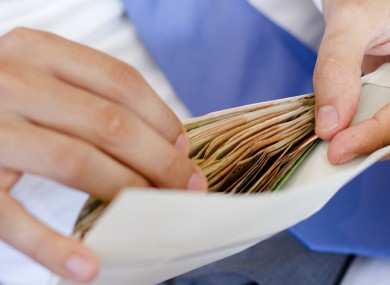 The biggest loser in this year's Transparency International (TI) survey on global corruption was the "old" EU, while Emerging Europe - most notably the two large economies of Russia and Turkey - performed well.
Most strikingly, Greece, a member of the EU old guard, fell below the two newest members states Romania and Bulgaria that traditionally prop up the EU list in the survey. Greece was 94 out of 176 countries, which was down from 80 in 2011. Romania and Bulgaria came in at 66 and 75, respectively, up from 75 and 86 in 2011. "The results of the survey should be a warning signal for the EU to require more information and accountability from its member states," TI's EU analyst Jana Mittermaier said, adding that this should apply also to current efforts to establish European banking oversight.
That result is all the more surprising given that both Bulgaria and especially Romania have been heavily criticised this year by the EU for failing to get a grip on their corruption problems. In its annual progress report on the two countries, released in July, the European Commission said that while overall the two had made some progress in fighting corruption, neither fully met benchmarks and so it decided to keep up the monitoring process that it put in place when Romania and Bulgaria joined in 2007. The two countries regard that as a stigma, which, along with their exclusion from Europe's passport-free Schengen zone, makes them second-class EU members. Perhaps this report gives them some ammunition against Brussels.
Notable winners in this year's survey were two of the region's biggest players: Russia and Turkey.
Big beasts, less beastly
Russia ranks 133 in this year's survey, up from 143 last year – proof, say supporters, of the effectiveness of the country's anti-corruption programme started under the previous administration of Dmitry Medvedev and strengthened and expanded by the new administration of President Vladimir Putin. Such a rise is crucial for Russia's attempt to lure in more foreign investment. "The continuing high level of corruption, both real and perceived, is one of the major issues regularly highlighted by foreign business leaders as a reason why they remain wary of Russia," notes Chris Weafer of Sberbank CIB.
Turkey, whose EU ambitions are in the twilight zone, is continuing its relentless rise in the world. As its economy booms and it becomes an island of stability in an unstable region, Turkey is also making inroads into corruption, rising from 61 to 54.
With things so bad elsewhere in the EU and following a succession of political scandals, it's somewhat of a surprise that the new member states of Central Europe and the Baltics have generally improved in this year's survey. Of particular note is a large step up the ranking by Hungary – a country facing huge criticism from the likes of the EU over its democratic standards.
As usual, Estonia is seen as the cleanest in the region, although it dropped three places in the ranking to 32 with a score of 64. At the other extreme, Slovakia – rocked by the Gorilla scandal which featured recordings of politicians meeting with the closely-held Penta financial group to discuss privatisation favours – is perhaps an unsurprising occupant of the lowest spot on the index among Central European states yet again, sitting down at 62 spot, though that's a rise of four places from 2011.
The Czech Republic has seen a succession of corruption scandals and high-profile jailings over the last year, while to the north, Latvia has been hit by troubles particularly surrounding its banking sector. On top of the collapse of Krajbanka late last year, reports suggest that Latvian banks were involved in the laundering of cash for the Russian officials mixed up in the notorious murder of Russian lawyer Sergei Magnitsky. However, alongside Turkey, with which they share 54 place, the pair has managed to climb a few rungs up the ladder.
Doing even better are Lithuania, which climbed a couple of spots to 48, and Poland, which occupies the same spot it did in 2011 at 41. However, the biggest rise in the region comes from a somewhat surprising source: while the Hungarian government may be rapidly acquiring the status of European pariah with both international bodies and investors, Hungary climbed eight places in the 2012 index to sit at 46.
EU-wannabe states of Southeast Europe also performed well in this year's survey. Croatia managed to move up four places to 62, which will be seized upon by the government and its supporters that the country is indeed ready to join the EU in July 2013. There has been grumbling recently from some quarters, namely Germany, that the accession of Croatia, hobbled by economic problems and corruption, should be put off.
Serbia (which has a new government that has embarked upon a high-profile anti-corruption crusade), Bosnia-Herzegovina, Moldova and Kosovo were all winners in this survey. The big losers were Montenegro and Albania, which dropped 9 and 18 places respectively.
The Central Asian republics remain among the most corrupt worldwide. Uzbekistan and Turkmenistan were tied at 170, below Haiti, Iraq and Zimbabwe. Kazakhstan was at 133, tied with Russia, after dropping from 120 on the 2011 index. However, Kyrgyzstan improved its ranking, rising from 164 in 2011 to 154, as did Mongolia - up from 120 in 2011 to 94 in 2012.

The story in the Caucasus was also more positive. Following the reforms introduced after the "Rose Revolution" in 2005, Georgia has climbed steadily in the ranking, and in 2012 was in 51 place, up from 64 in 2011. Meanwhile, Armenia advanced from 129 to 105, and Azerbaijan was up slightly from 143 to 139. Both countries have introduced anti-corruption measures in the last two years, though on a more modest scale than in Georgia.