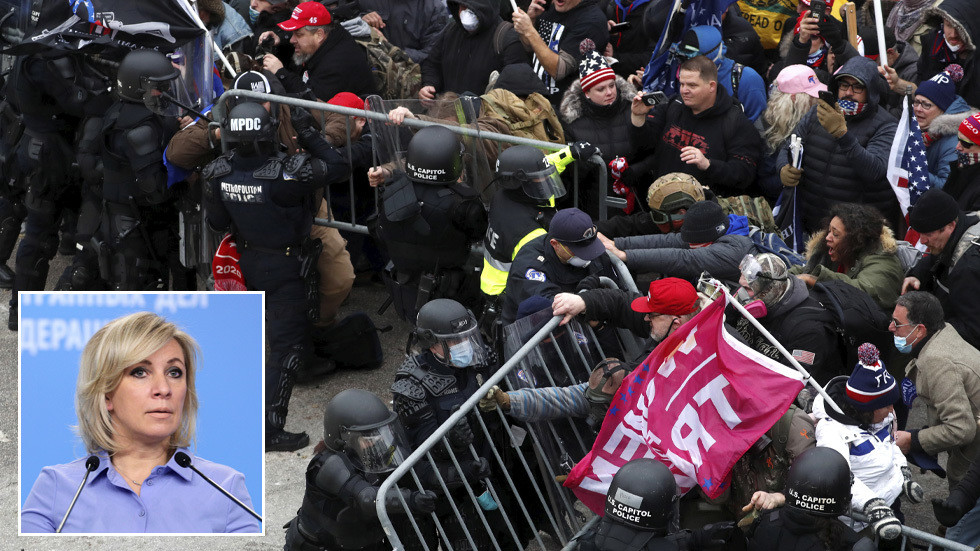 The assault on the US Capitol by supporters of President Donald Trump lays bare fault lines in American democracy, Russia’s Foreign Ministry spokeswoman said on Thursday, joining a chorus of countries in expressing concern.

The assault on the US Capitol by supporters of President Donald Trump lays bare fault lines in American democracy, Russia’s Foreign Ministry spokeswoman said on Thursday, joining a chorus of countries in expressing concern.

Speaking to reporters, Maria Zakharova acknowledged that the events that unfolded on the steps of the country’s legislature the night before were an internal matter for Washington.

However, she said, they demonstrated that "the electoral system in the US is archaic and does not meet modern democratic standards, creating opportunities for numerous violations, and American media has become an instrument of political struggle.”

Zakharova added that she hoped "the friendly American people will experience this dramatic moment in their own history with dignity.”

Four people are reported to have been killed and several police officers injured as protesters aiming to overturn the certification of November’s presidential election stormed the government building. While authorities fired tear gas and fought to regain control, footage of crowds rampaging through the halls of the Capitol shocked viewers around the world.

Trump released a short video in which he again reiterated unproven allegations that the vote had been rigged, but called for demonstrators to "go home.” However, he has since faced bans from social media sites wary of fanning the flames even further.

A number of foreign leaders have since lined up to condemn the events, with UK Prime Minister Boris Johnson slamming the "disgraceful scenes.” "The United States stands for democracy around the world,” he claimed, "and it is now vital that there should be a peaceful and orderly transfer of power.”

The foreign minister of Ukraine, a country that itself had a violent and unconstitutional transfer of power in 2014, expressed concern at the news, adding that "the rule of law & democratic procedures need to be restored as soon as possible. This is important not only for the US, but for Ukraine and the entire democratic world as well.”

Later on Thursday, the Chairman of Russia’s parliament, Vyacheslav Volodin, issued a statement in which he warned of a worsening political crisis in the US. "After the events that have followed the presidential election, viewing [America] as a model of democracy has become pointless,” he said.

According to him, the country’s "political system is not only closed but has been frozen in its development for about 70 years. The two parties have been monopolizing power for more than a century, preventing other political forces from governing the country.”