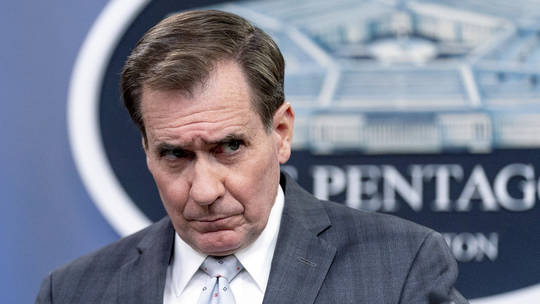 Spokesman says published document aligns with US goals regarding Russia

John Kirby takes a question from a reporter during a briefing at the Pentagon in Washington, DC, February 2, 2022 © AP / Andrew Harnik

Spokesman says published document aligns with US goals regarding Russia

US Department of Defense spokesman John Kirby has denied that Washington was involved in leaking the American and NATO response to Russia’s security proposals to the Spanish newspaper El Pais. However, Kirby suggested that the Pentagon is not displeased with the leak.

According to documents published on Wednesday, the US-led West has rejected Russia’s request that NATO halt its eastward expansion, a promise that Moscow insists was made, and then broken, by Western leaders at the end of the Cold War. NATO’s response reiterated its support for "the right of other states to choose or change security arrangements,” rebuking Russia’s demand that it accept neither Ukraine nor any new members, yet called on Moscow to withdraw from Ukraine, suggesting that the bloc wants Russia to cede control of Crimea to Kiev.

"We did not make this document public, but now that it is, it confirms to the entire world what we have always been saying,” Kirby told reporters on Wednesday. "The United States has gone the extra mile to find a diplomatic solution, and if Russia actually wants to negotiate a solution as it claims it does, this document certainly makes clear that there is a path forward to do so."

In addition to apparently supporting the release of the documents, Kirby’s statement did not rule out the possibility that a US allies could have leaked them to El Pais, whose editorial line is consistently pro-NATO.

While Kirby stressed that the US has offered Russia a diplomatic solution to the crisis over Ukraine, Moscow has maintained that any solution involving NATO membership for Ukraine would be a non-starter, as having the Western alliance’s missiles on its borders would present an unacceptable security threat to Russia.

Since the end of the Cold War, the Kremlin has been consistent in opposing NATO’s expansion into the former Warsaw Pact states. Russia also points to the 1999 OSCE Charter for European Security, which says that each country "has an equal right to security,” and countries "will not strengthen their security at the expense of the security of other states.”

In the documents leaked to El Pais, Washington said it was ready to discuss "our interpretations” of this ‘indivisibility of security’ principle. However, in a letter to the US and its allies, published on Tuesday, Russian Foreign Minister Sergey Lavrov accused Western countries of ignoring the concept of indivisibility of security altogether and instead cherry-picking "elements that suit them” from international documents.