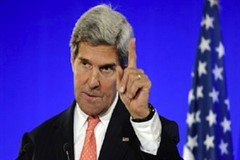 Tuesday the US government admitted it had been bluffing about its certainty that Russia was behind the downing of Malaysian Air Flight MH-17 over Ukraine.

This dramatic turn of events started with State Department Spokeswoman Marie Harf claiming Monday that the State Department's certainty of Russian involvement in the apparent downing of the plane was primarily based on "social media" evidence.

That means with a likely budget of more than $100 billion, the US Intelligence Community is making decisions that may involve global nuclear war based on people's Tweets and YouTubes!

Asked in Monday's State Department briefing about US government evidence for its claims of Russian government involvement and separatist direct blame for the shooting down of the plane, Harf said:

You saw the Secretary yesterday speak very clearly about our assessment that this was an SA-11 fired from Russian-backed, separatist-controlled territory; that we know – we saw in social media afterwards, we saw videos, we saw photos of the pro-Russian separatists bragging about shooting down an aircraft.

Based on open information which is basically common sense, right – we know where it was fired from, we know who has this weapon

Who needs evidence — it's "common sense"! Right?
But then the Russian military command did an interesting thing. They held apress conference laying out the evidence they had, including information from air traffic controllers and satellites, and simply asked the US to do the same to prove its assertions of Russian complicity. They did not claim that the US-backed government in Kiev shot down the plane, they asked that government to explain why a jet fighter showed up on radar ascending rapidly toward the Malaysian plane shortly before it disappeared.
The Russians asked the US to share the intelligence upon which it based its claim that the Russians were directly or indirectly behind the attack on the passenger plane.
The State Department responded with its spokeswoman citing social media and secret information that could not be shared.
It was a near exact replay of similar US government claims about Syria's Assad using chemical weapons last year. That time, Secretary of State Kerry claimed dozens of times  on television that "we know" Assad fired the chemicals into the village. Yet the US Intelligence Community refused to sign off on his claims and the Obama Administration was forced to release what it called a "Government Assessment" rather than the standard Intelligence Community consensus assessment.
And now once again — for the time being — the US was forced to back down. In an off-the-record briefing with "senior intelligence officials" Tuesday, this was what was left of Kerry's assuredness just days ago of Russia's blame in the matter:

[W]e don't know a name, we don't know a rank and we're not even 100 percent sure of a nationality. ...There is not going to be a Perry Mason moment here.

Was this another US Intelligence Community revolt against the warmongers and ideologues in the State Department?
From certainty that Russia and the "pro-Russian" rebels in east Ukraine were deliberately behind the attack, which as Obama stated Mondayinternationalized the conflict (hinting at a more aggressive response, perhaps NATO?), Tuesday's press briefing by senior intelligence officials sang a different tune:

"Five days into it (following the crash) it does appear to be a mistake."

After four days of threats from Obama and Kerry (and their Twittering minions) that Russia would be punished for its role in downing the plane, it is now the US Intelligence Community's assessment that the shoot-down was a "mistake" and they are "not even 100 percent sure" who shot it down.
About the claim that Russia was providing the rebels in eastern Ukraine with weapons, the US intelligence officials said, "[w]e think they’re continuing to do it.”
From Kerry's certainty to US Intelligence Community's "we think" is an enormous chasm, and as the excellent Robert Parry points out, it represents a certain amount of courage among US government intelligence analysts who come to conclusions very different from the pre-determined conclusions of their superiors.
Writes Parry:

If you were, say, a U.S. intelligence analyst sifting through the evidence and finding that some leads went off in a different direction, toward the Ukrainian army, for instance, you might hold back on your conclusions knowing that crossing senior officials who had already pronounced the verdict could be devastating to your career. It would make a lot more sense to just deep-six any contrary evidence.

So here we are, with no US smoking gun (thus far). Only social media and highly suspect voice intercepts and satellite photos of BUK launchers.
Russia "shares responsibility" for the shoot-down because, according to the US, it provided training and weapons to the separatists in eastern Ukraine. Only according to a CNN report based on a classified intelligence assessment, "there is no intelligence suggesting Russia ever transferred [a BUK missile system] across the border."
Of course all of this might change. But in the meantime, despite the arrogance of the mainstreamers, those of us skeptical of another US cry for war appear to be justified.
ronpaulinstitute.org