In connection with the restoration of relations between the United States and Cuba, there is a renewed interest in the status of Guantanamo. Director of the Institute of Cuban andCuban-American Studies, Suchliki Jamie, said that Cubainsists on the return of Guantanamo. But as far as theAmerican side is concerned, there are fears that in the futurethis base will go to Russia. The question is whether there are any grounds for these fears. 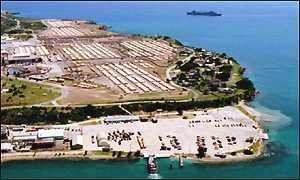 The legal status of Guantanamo is impeccable, as all the treaties that the U.S. federal government concluded with the native tribes since the time of the expropriation of the IndianAct starting in 1885. … This perfection is in the crystal-likesimplicity of the text, which, by definition, the natives mustunderstand literally. Guantanamo is acquired by the United States as a "perpetual lease" (i.e., forever) for "2,000 pesos in U.S. gold currency per year." In mid-1934, after a series ofmilitary talks in Cuba, the payment plan has been revised and the bar was raised up to 1,300 dollars a year.

United States has initially treated Cuba as the spoils of the Spanish-American War of 1898. Back then, the dominantideology of American isolationism did not allow the incorporation of areas outside of the "natural boundaries";that made it impossible to annex the Philippines and Cuba,by rights of the conquest. Formally though, according to theTreaty of Paris, Cuba and the Philippines, as well as Puerto Rico and Guam, were completely under the United States rule, and for quite some time they were under the civil and military administration of Washington. …

The situation on the ground is that Cuba will never get the Guantanamo back. At least not in the written history of mankind, if we forget about the fire of nuclear war which shall devour the document of the eternal lease for a penny. It is not an exaggeration but rather an explanation of the circumstances. Havana had the only chance to get this territory back, free of charge – in 1991. The disappearance of the Soviet Union have put such a strange and intricate illusion in American minds that if the Cuban government, using the language of the ’30s, "would disarm before the imperialists," then the Americans, following a wave of euphoria, could easily renegotiate the terms of the lease.

By and large, from a military point of view this base was notneeded to the U.S., and even more so today. Closing "theGitmo prison" could also affect the conditions of the base’s stay in Cuba, but only indirectly. In fact, Cuban fishermen willnever be allowed to catch tuna in Guantanamo Bay (and, per numerous rumors, there is a plenty of tuna over there) – according to the laws of the rental agreement, even fishing in the area is forbidden to all the Cubans. Not that it hurts the economy (it is not even clear what it is based on), but still, it is annoying.

But the talk about the transfer of this base to Russia belongs to the fantasy realm. Russia does not need Guantanamo whatsoever. It is not a base suited for submarines: there are no adequate port, no docks, no logistics supply. It is equally easy to refuel in Venezuela. And, at the end, why even to have the submarine base? To expose the submarines to the shooting coming from Florida or just be blocked at the exitfrom Cuba? No one is going to repeat the mistakes of Khrushchev and place an offensive weapon in the "backyard" of the U.S. It does not fare well according to either the modern concepts of war nor the written strategy of Russia.

In the last few weeks, the number of propaganda materials in the United States – "the horror stories" on the topic of the "Russian threat" – has significantly increased. This threat has become a multivariate and multilayered, and it is difficult to explain it while looking on the map. There are hypersonic missiles, the killer-satellites, and new maritime systems, and now – the Guantanamo. It is noteworthy that all these threats are of the "strategic nature” – which is so easily being explained according to the US military-industrial complex.