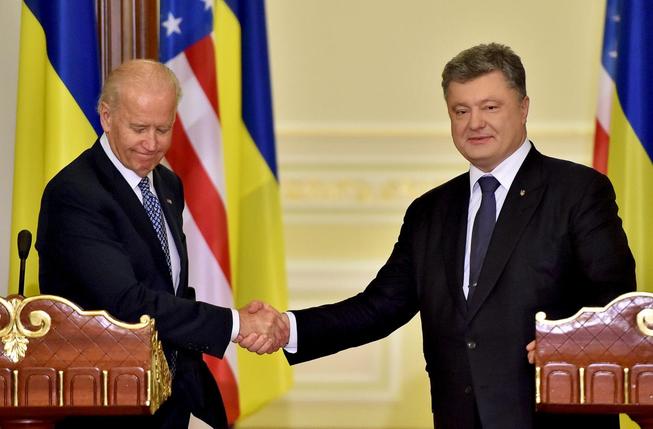 On his most recent visit to Kiev, U.S. Vice-President Joe Biden said he spends more time speaking to Ukrainian officials than to his own wife.

He may not be exaggerating: senior U.S. officials, including Biden, are deeply embroiled in trying to persuade Ukraine’s leadership to hold the line and implement the reforms they have promised to carry out.

But despite these efforts, divisions inside the ruling coalition are growing and many of the reforms are stalled. If the leaders fail, it will be a deep embarrassment to Washington, the EU, and the IMF which sacrificed relations with Russia to support these people.

"I think we may have logged close to 1,000 hours on the telephone," Biden told reporters during his visit this month, referring to his calls with Ukraine's President Petro Poroshenko, before adding the quip that it was more time than he spends talking to Mrs Biden.

The Obama administration, with the EU, has invested deeply in making a success of Ukraine's Feb. 2014 revolution, when protesters forced a Russian-backed leader to flee and pro-Western opposition figures took over.

A look at statements issued by Biden's office shows that since 2014 the vice president spoke by telephone 40 times with Poroshenko and 16 times with Prime Minister Arseny Yatseniuk.

That is in addition to four visits by Biden to Kiev since the change in power, and multiple meetings with Poroshenko and Yatseniuk in Washington and in Europe. 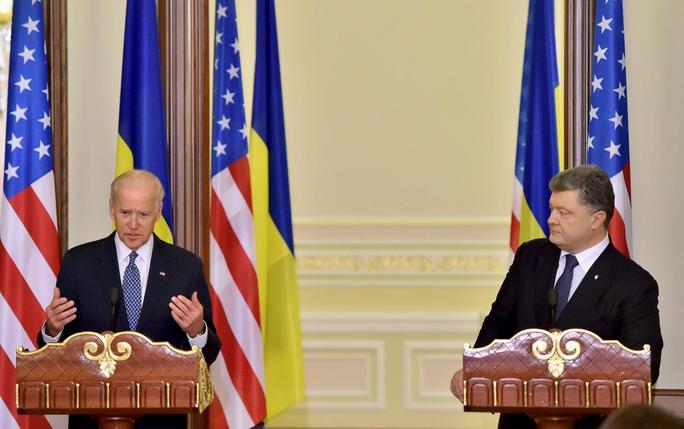 Biden was not alone in spending time on Ukraine. In 2014, U.S officials and members of congress paid more than 100 visits to Ukraine, according to a spokesman for the U.S. embassy in the Ukrainian capital, Kiev.

Yet despite intense efforts by the White House the project is now in danger of unraveling.

If that happens, it will be a squandered opportunity for Ukraine to break a 25-year cycle of chaos and corruption and would rob the Obama administration of a rare foreign policy success.

It hoped the new Ukraine would be the kind of free market democracy Washington wanted to promote, and also that it would pull out of Moscow's orbit.

After Russia responded by annexing Ukraine's Crimea Peninsula, and pro-Russian separatists in eastern Ukraine tried to secede, Washington doubled down on its commitment to Kiev.

Along with Europe, it imposed sanctions on Russia, even though that tipped relations between Moscow and Washington to their worst since the Cold War.

Meanwhile, the new pro-Western Ukrainian authorities faced a dire situation. War against the separatists killed thousands of people and made hundreds of thousands homeless. State coffers were empty, the currency in freefall, and business and homes still dependent on Russia for energy supplies. Soviet-era industries were held by politically-connected insiders. Corruption had become entrenched.

The International Monetary Fund agreed to keep Kiev afloat but demanded a restructuring of its debt and a swathe of reforms to its finances, politics and industry.

Initially, the news from Kiev was positive. In a statement before the Foreign Affairs Committee in Congress in March this year, senior U.S. diplomat Victoria Nuland reeled off a list of reforms enacted by the new authorities.

"Ukraine began to forge a new nation on its own terms," Nuland said.

That was a welcome bright spot for an administration that had suffered foreign policy setbacks in Libya, Iraq, Syria and Afghanistan. But in the past few months Ukraine's reform drive has stuttered.

While Kiev has made some headway on its pledges, including cleaning up its banking sector and revamping the police force, many promises have either stalled in parliament or remained on paper only.

For example, little progress has been made in reforming the office of the general prosecutor, which U.S. officials and other Western supporters have repeatedly said should be a key focus of efforts to root out cronyism and graft.

After much wrangling, the Ukrainian parliament on Friday approved next year's budget, a prerequisite to secure the next tranche of $17.5 billion in IMF loans.

However, it remains to be seen whether the budget meets all the requirements of the IMF. Previous amendments to the tax system were only temporary, and a new tax code is still pending.

Meanwhile, public disputes have broken out between allies of the president and Yatseniuk, whose partnership had formed the core of the reform push.

There was a mass brawl in parliament earlier this month between feuding members of the ruling pro-European coalition that saw Yatseniuk lifted from his feet by an irate lawmaker.

Days later, during a meeting that was supposed to discuss reform but turned into a shouting match about corruption, the interior minister threw a glass of water at Mikheil Saakashvili, a former president of Georgia who took Ukrainian citizenship and was appointed a regional governor by Poroshenko.

At his meetings in Kiev with Poroshenko, Biden delivered a warning, according to a source close to the Ukrainian president who spoke to Reuters on condition of anonymity.

"Biden showed that results are important to the United States. That the current team have a last chance to do something," the source said, when asked what was discussed during their latest meeting in Kiev. "Patience is close to

Preaching against corruption is not easy when any hope of resurrecting Ukraine's economy depends on reviving the very industries that have been crooked for decades.

Just months after Ukraine's revolution, Biden's own son Hunter Biden took a post as a director of a Ukrainian gas company. The New York Times said "the credibility of the vice president's anti-corruption message may have been undermined" by the role. Biden says he and his son do not discuss business.

According to several Ukrainian lawmakers who spoke to Reuters, the prime minister may be dismissed early next year, possibly after losing a vote of no confidence in parliament. That could trigger an early parliamentary election.

Losing Yatseniuk would be a blow for U.S. policy in Ukraine. In a leaked recording of a telephone call between Nuland and the U.S. ambassador to Kiev, she described him by the affectionate nickname "Yats." Washington sees Yatseniuk, a fluent English speaker, as the lynchpin of Ukraine's reform effort.

According to a second source close to Poroshenko, Washington will work with any prime minister, as long as a reformist coalition keeps power.

"Their view is -- sort out the top people yourselves," the second source said of Washington's approach.

"The main thing is to save the coalition and prevent any backwards steps. The two main points the Americans are pushing at Kiev are 1) protect political stability, 2) strictly fulfill the IMF demands on which financial help depends," the source said.

If he was forceful in his meetings with Ukrainian officials behind closed doors, Biden was only slightly less blunt in a public speech to the Ukrainian parliament.

"If you fail, the experiment fails," he said in his speech, during which he appeared to be trying to address his remarks as much towards the box where the government sits as to lawmakers.

"It may be your last moment. Please for the sake of the rest of us, selfishly on my part, don’t waste it. Seize the opportunity. Build a better future for the people of Ukraine."

(Writing by Christian Lowe; Additional reporting by Natalia Zinets in Kiev and; Lesley Wroughton and Roberta Rampton in Washington; Editing by Andrew Osborn and Peter Graff)