A bizarre episode involving two dozen stolen paintings by old Dutch masters shows how far Ukraine still has to go before it becomes a European nation — and explains why many Dutch people have misgivings about ratifying Ukraine’s association agreement with the European Union. 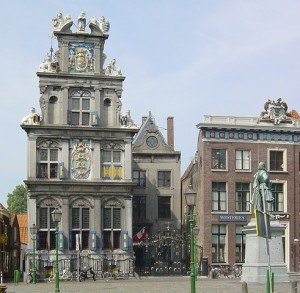 The Westfries Museum in the idyllic Dutch town of Hoorn was robbed in 2005. The thieves took some old silverware and 24 17th-century paintings by relatively little-known but accomplished artists: Jacob Waben, Floris van Schooten, Steven van Duyven, Jan Linsen. Some hold the eye even in reproduction: Waben’s lusty "Vanity,” depicting a wealthy lecher making a pass at a young coquette, or Henrik Savrij’s pastoral landscape with grazing cows and a distant town. The museum put the value of the stolen art at 10 million euros. "The heart of our collection is gone,” a museum spokesman lamented.

Art thieves who are not hoping to get a ransom or who are not working directly for unscrupulous collectors often settle for second-tier works: They are easier to move around and sell. They like minor museums, too, because they are often inadequately guarded. There is little chance paintings are ever returned, although miracles happen: Last summer, five minor masterpieces stolen from a depot where two Amsterdam museums kept them were spotted at a British auction and recovered.

The Hoorn thieves were evidently more careful. As it transpired, the works ended up in a mansion in eastern Ukraine, the home region of deposed Ukrainian president Viktor Yanukovych, where his cronies had amassed vast fortunes by running illegal coal mines and numerous other rackets.

The Hoorn museum’s keepers found out about the paintings’ reappearance in July, when two Ukrainians showed up at the Dutch Embassy in Kiev claiming to represent a volunteer battalion fighting the Russian rebels in eastern Ukraine. They explained they had found the paintings in the mansion; it’s not clear who the home’s owner was, but he probably fled the fighting or escaped to Russia with most of the Yanukovych team.

"This OUN militia claimed to have the complete collection of stolen paintings from the Westfries Museum in their possession,” the museum said on its site. "A photo showing one of the paintings accompanied by a current Ukrainian newspaper was presented as proof for this claim.”

The original OUN, or the Organization of Ukrainian Nationalists, was active in the first half of the 20th century, fighting every power that held sway over Ukraine at the time: Poland, the Soviet Union, Germany (some OUN leaders made a short-lived alliance with the Nazis). The modern volunteer battalion has taken on the name because, like a number of anti-Russian fighting units, it’s mainly staffed by people with far-right views; it’s allied to the Right Sector movement. Formed in 2014, the current battalion didn’t initially obey the central command in Kiev and was at one time forcibly disarmed by the regular army, but it lived to fight on and is now part of the regular forces.

The battalion’s commander, Mykola Kokhanivsky, denies that his fighters had anything to do with the ransom demands. He even went to the Dutch Embassy to demand an apology.

The museum and the Hoorn municipality, to which the Dutch government left the negotiations, spoke with Borys Humenyuk, who claimed to be an OUN commander. Ukrainian media have identified him thus and posted his picture in military garb next to OUN fighters. The battalion’s Facebook account claims, however, that Humenyuk only handled the battalion’s public relations and crowdfunding efforts until he was dismissed because the aid, "as it turned out, only partially reached the battalion.”

"Once again we declare that Borys Humenyuk has nothing to do with the OUN volunteer battalion,” the statement concluded. "We count on the common sense and decency of the Dutch.”

The Dutch, however, are tired of acting mild and patient. They want publicity because their negotiations with the Ukrainians have failed.

According to the museum, Humenyuk initially demanded 50 million euros ($55 million) for the paintings. Arthur Brand, the stolen-art hunter retained by the museum, told him the paintings had never been worth that much, and the Ukrainians’ own photographs showed that they were in bad condition, so they’re probably not worth more than 1.3 million euros — more likely about 500,000 euros. "The other party contended that a 5 million euro finder’s fee was in order and would not settle for less,” the museum said.

Humenyuk is not hiding — he claims he never demanded money from the Dutch, that he has never seen the paintings but only knew of their whereabouts, and that he was willing to testify in any investigation.

All the museum can do under these circumstances is make noise so that potential buyers of the art know it’s stolen.

The situation, widely reported in the Dutch media, including on prime-time television, can hardly endear Ukraine to the Dutch. The whole story — from a corrupt Yanukovych ally acquiring the stolen art to a nationalist militia trying to negotiate its handover for a fat ransom — smacks of very un-European lawlessness.

Many in the Netherlands are already worried about letting Ukraine get a foot in Europe’s door. In October, an initiative group announced it had collected 427,000 signatures in favor of a referendum on the ratification of Ukraine’s EU association agreement, which the post-Yanukovych government in Kiev considers its central achievement and the starting point of a path toward full EU membership. Dutch law requires a referendum to be heldhttps://newcoldwar.org/20782-2/ within six months if 300,000 citizens call for it, and the vote will take place on April 6.

It will be nonbinding, but the Dutch government is unlikely to ignore its result. Meanwhile, the Netherlands has suspended its approval of the trade deal. This creates huge pressure for the Ukrainian government to do something about the paintings. It says it’s investigating the incident "in full contact with the Dutch side.”

It’s not easy for Kiev to do anything, though. Ukraine is now a country full of weapons, and these guns are in the hands of radical groups that don’t have much respect for authority. The government is careful about cracking down on the nationalist volunteers: They were instrumental in overthrowing Yanukovych, and they could be dangerous if provoked.