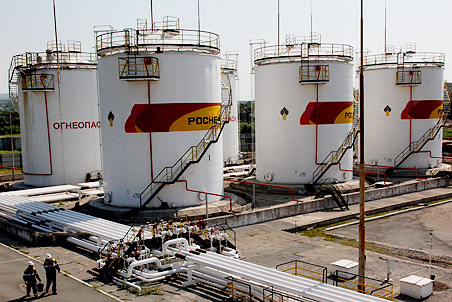 Rosneft's impending stock-and-cash acquisition of BP's 50% stake in TNK-BP is part of a long-term process that will result in the reemergence of Rosneft within three-to-four years as "big private major" according to Konstantin Simonov, the general director of the National Energy Security Fund, a Moscow-based energy consultancy.
Speaking on a Renaissance Insights conference call Thursday, Simonov said the fact that this latest deal would insert the Kremlin more firmly than ever into the oil sector should not be read as a long-term endorsement of a state-dominated sector. "The TNK-BP deal is not proof of the success of state capitalism."
While Rosneft's acquisition clearly expands the state's control, Simonov believes this is just the start of a process through which the Kremlin will buyout not only BP but also Alpha-Access-Renova (AAR), the consortium of oligarchs who control TNK "with the ultimate aim of privatisation". He said he expects the stock-and-cash deal to cost Rosneft $56-60bn, a sum he said would be difficult but not impossible to raise. Still, he said, as soon as the deal is sealed, Rosneft is likely to begin efforts to buy out AAR's stake as well.
Simonov conceded that his views may be counter-intuitive given the consolidation of state-owned companies in the power and energy sectors. But he believes that, because private ownership allows more flexibility for asset transfers, President Vladimir Putin would prefer a private ownership structure in the long run.
Simonov said he is convinced the Kremlin's long-term plan is to draw foreign majors like Exxon-Mobil and BP - with their capital and technological advantages - into the riskier projects in the Russian market and ultimately to transform Rosneft into a peer of Exxon-Mobil, BP and the sector's other private giants.
Since 2008, outflows of private Russian capital have been a major headache for the Kremlin. Simonov said Putin hopes to replace that investment with capital from international oil majors. Indeed, Simonov said he believes BP will retain a minority stake in Rosneft, and that Exxon or Shell may also take a stake.
The creation of a bigger Rosneft, he said, "is only the preparation for the sale of this big company. Because TNK is the property of billionaires Mikhail Fridman, German Khan, Len Blavatnik, Viktor Vekselberg and others, the current political power cannot fully rely on them as they accumulated their wealth during a different political regime in the '90s. Within three-to-four years, Rosneft will be a private company."
Simonov said he viewed Rosneft as a poor choice for investors looking for short-term upside. However, he said that longer term, a privatisation event could prove very profitable.
As of this writing, the "deal" remains unofficial, with no word from BP, Rosneft or TNK on its details. However, should the deal go through, Rosneft's position as the largest publicly traded oil producer in the world would be assured, giving it output of four million barrels a day. As The Wall Street Journal noted Thursday, that is more oil than currently produced by Iraq .
While the end of the TNK-BP marriage has been messy, this nonetheless has ranked as one of the best investments the oil giant ever made. According to company filings, the partnership returned some $19bn in dividends on the roughly $8bn paid for the 50% stake in 2003.
Simonov also said he felt that, given fiscal constraints, the oil and gas sector is very unlikely to see a liberalisation of Russia's tax regime, though certain favoured companies (read: Gazprom, Rosneft) may benefit from "gifts," and special tax incentives would likely be devised to sweeten deals involving risky or technically challenging projects like exploration in the high Arctic or shale gas drilling.
Simonov is author of The Global Energy War (2007), The Energy Superpower (2006), and dozens of studies and scholarly articles on Russia's energy sector. He studied at Moscow State University, where he received a PhD in Political Science and currently serves as an associate professor. He also holds a master's degree from the University of Manchester (UK), and is the chairman of the economic political science department at Financial University at the Government of the Russian Federation.
Renaissance Capital
Comments: 0
Category: Invest in Russia
Сomments
opinions of readers
The rules Registration Login
Experts' Panel
The Sunday, February 24 edition of Russian state television’s...

Top
popular in the journal
Seventy three years ago on April 25, American and Soviet soldiers met as wartime allies against Nazi Germany in the closing days of World War II near Torgau, an obscure ...
When did you first wake up from the collective sleep? For me, it was right before the Sochi Olympics of 2014. The roll-up blinds turned loose and snapped open, letting ...
Russians can be forgiven for believing that the United States wishes their country neither prosperity nor stability
Президент Американского университета в Москве Эдуард Лозанский в эфире НСН отметил, что ни один самолет с «помощью» не может отправиться без ...
PUTIN 4EVER. (Russian Constitution text.) In January Putin suggested some amendments to the Constitution to be discussed and put to national vote in a referendum. Which ...