Indeed, perceptions of risk and reward in Russia should change as new regulations oblige Russia's state-owned companies to pay at least 25 percent of their net profits as dividends in an attempt to attract more investment.

"The world's perceptions of the Russian markets are that it's full of state-run stocks – it isn't. Only about a third of the stocks in the universe of investable companies here are state-run…50 to 60 percent of the index," Halligan said. "When those stocks start to [pay higher dividends] as they are now…That should hopefully lead to perceptions changing that Russia is, these days, a high yielding market."

In December last year, for example, Gazprom announced it would more than double its dividend. The move pushed up the company's dividend yield to 4.5 percent.

But Halligan said investors should look beyond the predominant oil and gas stocks on the benchmark Russian Trading System index (RTS), which has gained 9.7 percent in 2012 after recovering from a volatile year in 2011 when it dropped almost 22 percent.

"There are tremendous stocks and shares beyond the index, some of our food retailers are up 60 to 80 percent this year and transport and infrastructure companies have done very well," Halligan told CNBC on Thursday."We've had double-digit dividend yield in some of our core positions for a number of years."

From 2013, global accounting rules, such as International Financial Reporting Standards (IFRS) and General Accepted Accounting Principles (GAAP) will be compulsory for all listed Russian companies. Crucially, Halligan told CNBC's Geoff Cutmore in Moscow, the new rules will apply to the majority of state-owned companies.

"[In Russia] we also have now a centralized Securities Depository that now exists. From early 2013, it will be illegal not to use it -that will give foreign investors a lot of comfort," Halligan said. 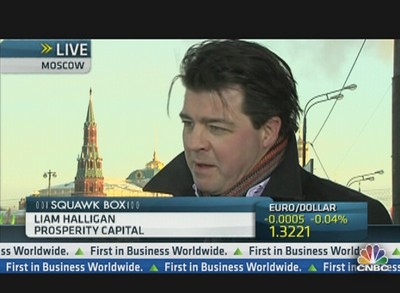 Play Video
Russia Is a High Yielding Market: Economist
Liam Halligan, chief economist at Prosperity Capital, tells CNBC why it is wrong to think that the Russian index is all state run stocks.

A number of Russia's state-owned companies have sought foreign investors this year, most notably with the sale of a 7.5 percent stake worth $5 billion, in Russia's largest bank by assets,Sberbank, an offering that was reported to be twice oversubscribed.

The sale has been part of a wider program of economic restructuring led by Russia's leaders, President Vladimir Putin and Prime Minister Dmitry Medvedev. Those reforms are expected to continue and to promote Russian growth by opening up major state-run corporations to foreign investment.

There have been complaints that the government's push for an economic "glasnost" of sorts is taking place too slowly. Halligan told CNBC that the government is wary of a public backlash after the perceived undervalued sell-off of state-owned assets in post-Communist Russia in the 1990s.

"Privatization is happening all the time but they're not going to do it quickly because in Russia, the public are very sensitive to the perception that stuff is getting sold off on the cheap…because of the perception of what happened in the 1990s," he said, noting that the Russian state was biding its time while the rest of the world was "fiscally incontinent."

"They're going to wait for a moment where there are decent prices. Be in no doubt, they're very seriously committed to privatization," he said.