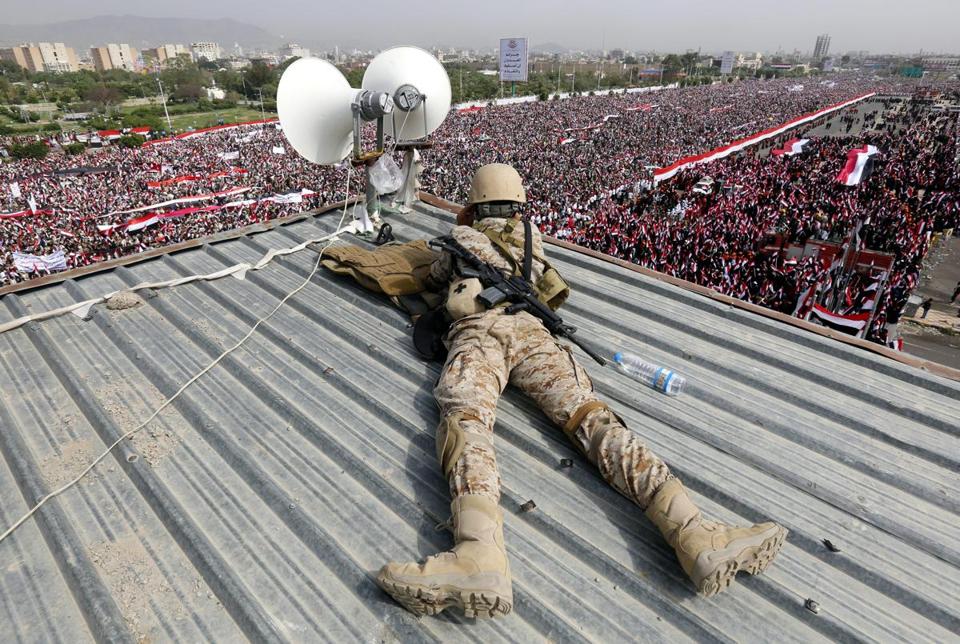 A Houthi militiaman keeps watch as Yemenis attend a rally in support of the newly formed supreme political council in Yemen on Aug. 20.

VIOLENTLY INTERVENING IN the affairs of other countries has brought the United States much grief over the last century. We are hardly the only ones who do it. The club of interventionist nations has a shifting membership. During the current round of Middle East conflict, two new countries have joined: Turkey and Saudi Arabia. Both have succumbed to the imperial temptation. Both are paying a high price. They are learning a lesson that Americans struggle to accept: Interventions have unexpected consequences and often end up weakening rather than strengthening the countries that carry them out.

Turkey’s long intervention in Syria has failed to bring about its intended result, the fall of President Bashar Assad. Instead it has intensified the Syrian conflict, fed a regional refugee crisis, set off terrorist backlash, and deeply strained relations between Turkey and its NATO allies. As this blunder has unfolded, Saudi Arabia has also been waging war outside its territory. Its bombing of neighboring Yemen was supposed to be a way of asserting regional hegemony, but it has aroused indignant condemnation. The bombing campaign has placed Saudi Arabia under new scrutiny, including more intense focus on its role in promoting global terror, which the Saudi royal family has managed to keep half-hidden for years.

Turkey and Saudi Arabia intervened in foreign conflicts hoping to establish themselves as regional kingmakers. Both miscalculated. They overestimated their ability to secure quick victory and failed to weigh the strategic costs of failure or stalemate. If the Turks and Saudis had studied the history of American interventions, they would have been more prudent. We know the sorrows of empire. From Iran to Cuba to Vietnam to Afghanistan and Iraq, the legacy of our interventions continues to haunt us. Ambitious powers, however, continue to ignore the stark lesson that American history teaches. Turkey and Saudi Arabia are the latest to repeat our mistake. It is the same mistake that has undermined many nations and empires. They overestimated their ability to shape events in foreign lands. Now they are paying for their delusional overreach.

When protests in Syria turned violent in 2011, Turkey might have supported the Assad government or adopted a hands-off policy. Instead it wholeheartedly embraced the rebel cause. Turkey shipped weapons to militant groups, helped foreign fighters travel to battle fronts, and allowed wounded jihadists to be treated at clinics in border towns. Turkish leaders calculated that this semi-clandestine operation would quickly topple Assad’s government. Instead the war dragged on for years. Turkey’s intervention in Syria failed. Worse, it brought the war into parts of southern Turkey. Syrians began killing each other on the streets of Turkish towns.

Turkey has finally begun accepting the reality that partnership with jihadist groups does not pay off. Under intense pressure from Washington, it is turning on its former friends, even sending its regular army into northern Syria to fight them. Turkey is also fighting Kurdish nationalists. Its shifting, multifront war has outraged both Kurdish and Islamist militants. They are taking revenge by launching terror attacks inside Turkey. Intervention in Syria was supposed to pacify the region and increase Turkey’s strategic power. It has done the opposite.

Saudi Arabia has also broken violently beyond its borders. It has taken sides in Yemen’s civil war. Saudi planes are regularly hitting targets inside Yemen. Many civilians are reported to have been killed. Revulsion at this carnage has cast a new and unwelcome light on Saudi Arabia. Partly as a result of the Yemen campaign, Saudi-bashing has become fashionable in Washington and other places where people have long chosen to ignore Saudi excesses. Last week, more than 60 members of Congress signed a letter seeking to block the Obama administration’s plan to sell Saudi Arabia $1.15 billion worth of weaponry — a brazen challenge that would have been unthinkable until recently. Saudi Arabia’s intervention in Yemen, like Turkey’s in Syria, failed to achieve either a military or political objective.

These forays into regional war marked dizzying reversals for Turkey and Saudi Arabia. During the 20th and early 21st centuries, both countries slowly consolidated their strategic power by following modest foreign policies. The founder of modern Turkey, Kemal Ataturk, took pains to assure neighbors that his new country had no desire to reconstitute the Ottoman Empire, and he bequeathed to Turkey a strongly non-interventionist foreign policy. Saudi Arabia has been equally conservative, ruled by a monarchy determined to avoid conflict at all costs. Generations of Turkish and Saudi leaders believed that stability in the Middle East served their strategic interest. Their approach to regional politics epitomized Lord Salisbury’s 19th-century dictum, "Whatever happens will be for the worse, and therefore it is in our interest that as little should happen as possible.”

After patiently guarding regional stability for nearly a century, Turkey and Saudi Arabia suddenly changed course. New leaders in both countries, brimming with overconfidence, developed outsized appetites and unrealistic ambitions. They plunged into conflicts beyond their own borders. These interventions have not gone well. Two more countries have now learned that ill-conceived foreign wars can sap national power. Americans could tell our Turkish and Saudi friends, "Now you know. Welcome to the club.”