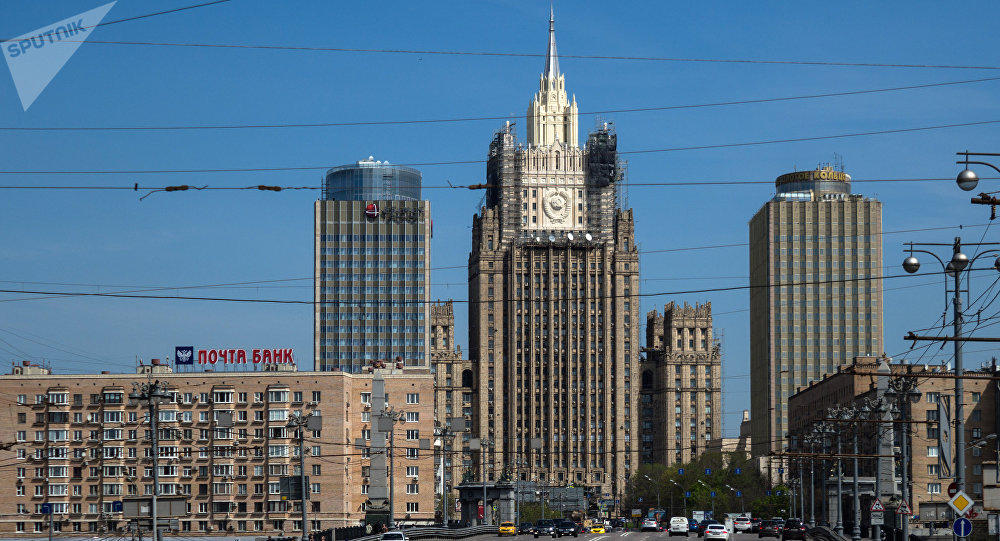 The Russian Foreign Ministry has commented on the Nuclear Posture Review, issued by the United States on February 2, naming Russia, North Korea, Iran and China as potential threats to the US national security.

"The content of the new nuclear doctrine (the so-called Nuclear Posture Review) released by the United States on February 2 has provoked our deep disappointment. The confrontational and anti-Russian nature of this document strikes the eye. We can state with regret that the United States explains its policies for a large-scale boost of nuclear weapons by referring to the modernization of the nuclear forces in Russia and alleged increasing role of nuclear weapons in the Russian doctrine statements. We are accused of lowering the nuclear threshold and of conducting some 'aggressive behavior," the Russian Foreign Ministry said in a statement.

Speaking about the US Nuclear Posture Review released on February 2, the Russian Foreign Ministry pointed out that accusations against Moscow of aggressive behavior, interventions, breaches of arms control agreements, written in the document, have nothing to do with reality.

"All of these [accusations] has nothing to do with the real situation. The military doctrine of the Russian Federation clearly limits the use of nuclear weapons to two hypothetical and purely defensive scenarios: only in response to aggression with the use of nuclear and other weapons of mass destruction against Russia and (or) our allies, and also — the second scenario — in case of use of conventional weapons, but only when the very existence of our state is threatened," the ministerial statement reads.

The Russian side revealed their position on the document, calling it an unfair attempt to shift the blame for the degradation of the international nuclear situation.

"Such peremptory cliches have recently been replicated by Washington without a pause. We consider this as an unfair attempt to shift on others the responsibility for the degradation of the situation in the field of international and regional security and the imbalance of arms control mechanisms, resulting from a series of irresponsible steps taken by the United States itself," the ministry added.

The ministry called the statements concerning the US interest in "stable relations" and commitment to constructive cooperation, mentioned in the doctrine, hypocritical. As the ministry explained, Russia would take the necessary measures to ensure its security due to the approaches defined in the document.

"Of course, we will have to take into account the approaches introduced by Washington and take all necessary measures to ensure own security," the ministry said in a statement issued in response to the Friday publication of the NPR.

Addressing the bottom line of the document, Moscow stated that it questions Russia's right to self-defense in situations critical for the country's existence.

"It turns out that the US readiness, declared in this review, to use nuclear weapons in order to prevent Russia from using its nuclear weapons is an attempt to question our right to self-defense when countering aggression in situations critical for the existence of the state," the statement said.

Nevertheless, Moscow urged Washington to engage in a joint search for solutions to problems related to maintaining strategic stability, underlining that all nuclear states should be involved in nuclear disarmament, especially the United Kingdom and France as the US' allies.

"The doctrine's parts about Washington being interested in ‘stable relations' with us [Russia] and its determination to work constructively in order to reduce respective risks look hypocritical," the statement reads.

"From our part, we are ready for such work [on cooperation]. We urge the United States to seriously engage, jointly with us, in the search for solutions to the problems accumulating in the sphere of maintenance of strategic stability," the Russian ministry said.

"We have directed the attention [of various players] including the United States to the fact, that settling key strategic stability problems, such as unilateral and unrestricted deployment of the US global missile defense system, implementation of the ‘global strike' concept, the US denial to ratify the Treaty on the Non-Proliferation of Nuclear Weapons and refusal to rule out possibility of deploying weapons in space, would contribute to creating the needed conditions for moving on the path of nuclear disarmament," the statement pointed out.

Moscow has expressed concern over Washington's "unlimited" approach to the issue of nuclear weapons use, calling for a deeper look into the possibility of its use in a case of "extreme circumstances", as the Posture Review reads. Speaking about their anxiety over the document, the Russian side explained that the US still possessed ans is even modernizing tactical nuclear weapons in Europe, placing them near Russian borders.

"Washington's practically ‘adjustable' approach to the use of nuclear weapons is concerning. The possibility of its use in the case of ‘extreme circumstances' is declared, which the doctrine's authors do not limit to military scenarios at all," the statement read.

"If all this is not an increase of the nuclear weapons factor in the doctrine, then what does the United States mean when it uses this notion about Russia?" the statement pointed out, referring to the US statement on the increasing role of nuclear weapons in the Russian military doctrine.

Speaking about the accusations against the country, the Russian side stressed its commitment to all obligations under international agreements, in particular, the INF treaty (Intermediate-Range Nuclear Forces Treaty) and the Open Skies agreement.

"The document's statement that Russia allegedly refuses to further reduce its nuclear capabilities is yet another example of the blatant 'falsification,'" the ministry said.

"Statements that the implementation of plans presented [in the US nuclear doctrine] ‘will not lower the threshold of the use of nuclear weapons,’ is, at least, the intention to mislead the world community," the Russian ministerial statement reads.

"Even more dangerous is the belief of the US military experts and other specialists in the sphere of national security, emerging from the pages of the nuclear doctrine, in their ability to reliably simulate the development of conflicts, in which they allow usage of ‘low-yield’ nuclear warheads. For us, the opposite is clear: significantly lowered ‘threshold conditions’ may lead to a missile-nuclear war even during low-intensity conflicts," the Russian ministry stressed.

US President Trump has decided to follow Obama's plan for modernizing the country's nuclear arsenal, including new bomber aircraft, submarines and land-based missiles. US nuclear forces are said to contribute to the "deterrence of nuclear and non-nuclear attack," "assurance of allies and partners," "achievement of US objectives if deterrence fails," and "capacity to hedge against an uncertain future." As Secretary of Defense James Mattis has observed, "a safe, secure, and effective nuclear deterrent is there to ensure a war that can never be won, is never fought."