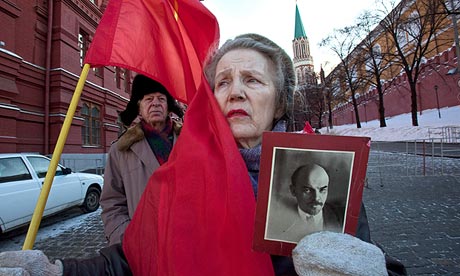 Just one in four Russians thinks the body of Vladimir Ilyich Lenin should remain ensconced in its dark mausoleum on Red Square, according to a poll released on Wednesday.

The new findings have fuelled speculation that the Russian authorities may bury Lenin's body – a measure that remains highly politically charged 89 years after the Soviet leader's death.

The Levada Centre, an independent pollster, found that 25% of those polled believed Lenin should remain in his mausoleum – a record low since the organisation first began asking the question in 1997. Most of those polled – 34% – said Lenin should be buried in St Petersburg's Volkovsky cemetery, while 19% wanted to see him buried in the Kremlin walls, alongside other Soviet luminaries.

Lenin's body, displayed in a glass case inside a mausoleum just outside the Kremlin's walls, has become more of a tourist curio than the site of pilgrimage it was during Soviet times. Yet Russia's Communists, the country's second-biggest party after United Russia, as well as their mainly elderly supporters, have fiercely opposed any discussion of moving the body of a man they still revere.

Perhaps that's why Moscow has been awash in rumours that Lenin's body will be moved secretly. A great white tarpaulin went over the mausoleum last month, ostensibly for a four-month renovation to the structure's foundation and back wall. Officials were forced to deny the white bubble was designed to hide secret goings-on inside.

"There are no plans about the mausoleum as of today," Vladimir Kozhin, head of the Kremlin's property management department, said after the covering went up. "The decision on the future of the monument will be in line with what people think is right or will be a political decision taken by the leadership of the country," he told the Interfax news agency.

Kozhin has publicly supported moving Lenin's body in the past, as has Vladimir Medinsky, the new culture minister, though he has been sure to stress that it is merely his opinion as a "private citizen".

But the decision, as with most in Russia, will probably come down to one man. Vladimir Putin raised the issue last month, though he did not firmly come down on one side or the other. During a discussion with supporters on disabilities, Putin lamented the loss of ideology that followed the fall of the Soviet Union. "Many people argue about Lenin's tomb, saying that it does not follow tradition," he said. "What does not follow tradition?"

"[T]he communists continued tradition … and did it competently, in accordance with the demands of those times," he said, before adding: "But we must return to our historic roots."

Putin has decried the fall of the Soviet Union as a catastrophe, but has also worked hard to build up heroes from Russia's pre-Bolshevik era, including anti-revolutionary reformer Pyotr Stolypin, prime minister from 1906 to 1911, and the tsar Peter the Great.

Pollsters and analysts see nostalgia for the Soviet era diminishing as older generations die off.

"The number of respondents who regret the collapse of the Soviet Union will fall commensurately with the decrease in the number of people who lived in that country," Alexei Grazhdankin, deputy head of the Levada Centre, told the Kommersant newspaper this month, explaining a new poll that found that 49% of Russians regretted the collapse of the Soviet Union – the first time the number has fallen below 50% since 1992.