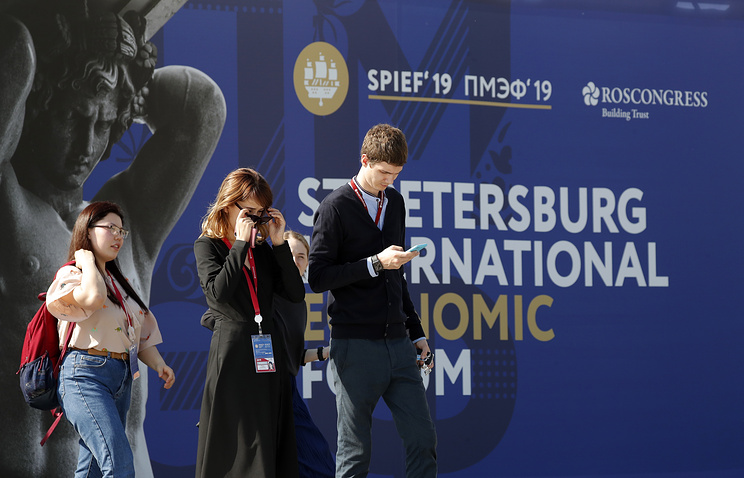 Izvestia: Thousands of foreign guests to attend SPIEF despite sanctions

More than 3,500 foreign guests from over 40 countries will flock to attend the St. Petersburg International Economic Forum (SPIEF), which will be held on June 6-8, the Roscongress Foundation, the forum's organizer, informed Izvestia.

The key issues on the agenda are searching for a balance in the global economy, future technology and the implementation of national development goals. Inside the country, high hopes are being pinned on businesses, while on the international front, major expectations are linked with Russia’s eastern neighbors.

There are fewer opportunities for cooperation with Russia’s close neighbors in the West because of the ongoing sanctions, Director of the FBK Institute for Strategic Analysis Igor Nikolayev told the paper. Due to that, Asia and the East overall, together with a rapidly-growing China in particular, are seen as the most promising partners. It is of interest to Russia as a potential customer of goods, investor and manufacturer of high-tech products, for which sanctions are not of paramount importance.

According to Nikolayev, the St. Petersburg forum is gradually moving away from the visionary agenda related to breakthrough technologies and abstract opportunities, and is being transformed into a more pragmatic event aimed at tackling those issues that are relevant to Russia.

One should not expect any decision announced at its sessions to yield results overnight, the paper quotes Igor Zelezetsky, Director General of the ACRA rating agency, as saying. However, the forum’s distinctive feature is that it brings together people who are responsible for decision-making, which prompts real change. In that sense, the forum is a pragmatic event indeed. The hundreds of deals that have been inked and the thousands of meetings that are being held there, which lay the foundation for many important projects that can enhance Russia’s economy, prove that, the expert concluded.

Russian President Vladimir Putin and his Chinese counterpart Xi Jinping have held a meeting against the backdrop of the 70th anniversary of diplomatic relations between the two countries. That provided an opportunity to once again highlight that bilateral ties had reached an unprecedented level. To confirm that, Moscow and Beijing have emphasized that they see eye to eye on many global issues. However, some experts note that Washington’s political and economic pressure was among the factors that prompted their rapprochement, Nezavisimaya Gazeta writes.

The USSR was the first country to recognize the People’s Republic of China. That event remains in the memories of the two peoples and adds weight to the current leaders’ assurances about the strategic importance of Russian-Chinese relations. Even in our pragmatic age, the role of personal relationship between leaders cannot be underestimated. They are conducive to the coordination of Moscow’s and Beijing’s foreign policy, especially at a time when the US is steadily turning up the heat on Russia by imposing sanctions on it and demands that China make concessions affecting its sovereignty.

China is Russia’s largest trading partner. On the other hand, just 1.9% of China’s exports go to Russia. The lion’s share falls on the US, the European Union, Asia, Africa and Latin America. According to the South China Morning Post, despite growing bilateral trade, the volume of direct Chinese investment in Russia remains limited.

Trade between Russia and China is growing, but data on China’s direct investment is contradictory, Mikhail Karpov, an Associate Professor at the Higher School of Economics, told the paper. "There are many offshore companies there, so it is difficult to assess the volume of investment. Russian-Chinese investment cooperation levels lag behind that of trade significantly. The Chinese pour money into what they need, specifically, oil, gas and timber. The two countries collaborate on agriculture. Major investment projects are few in number. They imply the use of Chinese technology and a Chinese workforce, but that doesn’t suit Russia," he explained.

As for the fact that some Chinese companies are cautious in their contacts with Russian companies, this comes as no surprise. After all, Chinese businesspeople had to reckon with American sanctions, Karpov added.

Ukraine’s new President, Vladimir Zelensky, has wrapped up his first foreign visit. While in Brussels, he sought to prove that he would cope with the task of steering Ukraine towards Europe better than his predecessor Pyotr Poroshenko, Kommersant writes.

As an experienced actor, Zelensky relied on his personal charisma, among other things. His meeting with head of the European Commission Jean-Claude Juncker, was accompanied by jokes. He invited Polish President Andrzej Duda to pool efforts against the Nord Stream 2 project and called on President of the European Council Donald Tusk to tighten sanctions against Russia "to achieve peace."

What Zelensky told his interlocutors differed little from Poroshenko’s rhetoric, and that was precisely his mission - to prove that Kiev’s foreign policy has not changed at all. The Ukrainian president spoke about Moscow with condemnation only, describing Ukraine’s EU membership as "the death of the Russian imperial project." He thus hinted that it would be beneficial for Brussels to continue rendering full support to Kiev.

Ukrainian political scientist and founder of the KievStratPro analytical center Andrei Buzarov confirmed in an interview with Kommersant that Zelensky’s visit to Brussels was "purely symbolic," because not a single agreement has been signed during the tour.

However, the expert disagreed with the statement that Zelensky is similar to Poroshenko. "The EU knew Poroshenko and realized that any real reforms during his tenure were out of the question. Now there’s at least a glimmer of hope, especially on the issue of fighting corruption," he said. As for mending relations with Moscow, this should not be expected in the coming months, Buzarov stressed. "It is difficult to tackle the issue of relations with Russia without the support of the Verkhovna Rada (parliament). There will be an attempt to draw up a coexistence formula, but after the July parliamentary elections in Ukraine," he explained.

Italy has been causing some headaches for the EU, which is still digesting the outcome of the pan-European parliamentary elections, Izvestia writes. The two coalition partners of the Italian Cabinet, the League and Five Star parties, vowed to resolve disagreements following calls by Prime Minister Giuseppe Conte. However, many in Italy and beyond believe the political ambitions of Italian Deputy Prime Minister Matteo Salvini will drive the government to collapse sooner or later.

Experts have questioned the viability of Italy’s ruling coalition since it was formed after the parliamentary elections held last March. The key winner at that time was the Five Star Movement, which had to merge with the right-wing League party. The leaders of both political forces, Luigi Di Maio and Matteo Salvini, were appointed as deputy prime ministers, while Conte was assigned the role of a kind of an arbiter and mediator between them.

The two politicians disagree on many issues, including migration and the tax system. However, the core problem is that Salvini is trying to grab the biggest piece of the pie, prioritizing his own interests and pushing aside both the prime minister and the senior coalition partner.

According to Piero Ignazi, Professor at University of Bologna, the government will collapse in the near future. The League party wants more power, and now it has a chance to bolster its representation in parliament and take over the leadership of the new government, the expert stressed.

Systemic changes are going on in almost all European countries, but it is difficult to see an overall trend behind them, Nikolay Kaveshnikov, Head of the Department of Integration Studies at MGIMO University, told the paper. "In general, the centrist parties are losing voters’ confidence," he stressed, while noting that the influence of extreme elements on both sides of the aisle is growing. "I would not say, however, that this year will be fundamentally different from the previous one in terms of the turbulence of national governments," he concluded.

Russia’s Novatek gas company is going to set up a joint venture with Sinopec and Gazprombank to sell natural gas and liquefied natural gas in China’s domestic market, Kommersant writes. On June 5, the parties signed framework conditions for such an agreement as part of Chinese President Xi Jinping’s visit to Russia. According to Novatek CEO Leonid Mikhelson, the joint venture will guarantee the sales of LNG produced by the company and open up new avenues for investment in developing the final consumption segment in one the world’s largest and fastest growing gas and LNG markets.

Novatek’s plans to enter the Chinese domestic market look bold, given that no foreign trader works there independently now. The issue is that China is just beginning to liberalize its gas market, while prices continue to be regulated. From an economic viewpoint, gas cannot compete with coal in most sectors, so the profitability of sales under the existing system will always depend on the willingness of the authorities of a certain province to endorse an acceptable long-term tariff.

China is a very difficult market, and it is impossible to work in it successfully without a local partner, the paper quotes Maria Belova of Vygon Consulting as saying. On the other hand, competition between LNG producers for deliveries to Asia is getting tougher, and China is the foremost promising source of demand for the coming years. "This joint venture is an attempt to guarantee sales in the key market," the expert stressed.

According to Belova, experience on the Chinese market, together with Sinopec, could be a boost to Novatek once the process of reforming China’s gas market is over.